Chinese manufacturer BYD has launched what it claims to be the longest electric bus in the world. 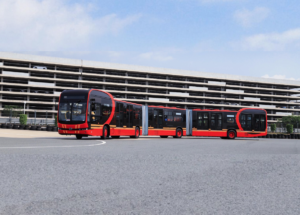 It was designed primarily with South American markets and large cities such as Bogotá in mind, where the authorities want to replace the current extra-long buses with cleaner electric alternatives.

Passenger numbers on Bogotá’s BRT (Bus Rapid Transit) network have hit more than 2.8 million in a single day and so demand for vehicles like the BYD K12A is clearly there.