The global clamour to address the demands of a shifting logistics landscape while reducing emissions and urban congestion has been seen far and wide. The phenomenon has however inspired the creation of dozens of original and exciting last-mile delivery concepts.

One such solution, the eBike – a cross between a van and a bicycle – is increasingly being seen as part of the future fleet mix and is already being trialled by a number of distribution companies. Electric Assisted Vehicles, an Oxfordshire-based start-up behind the idea, is convinced that the secret to lies in starting the design process by taking a van and introducing elements of bike, rather than the other way around.

In this way, fleets enjoy all the benefits of pedal power – silent emission-free, fuel- short distances distribution – without losing all the features they’ve come to know and expect from the traditional van.

This unique approach to R&D has led to the company’s EAVan that launched to an enthusiastic audience at the Oxford EV Summit recently.

“We wanted the EAVan to be as usable as possible by anyone”, he said. 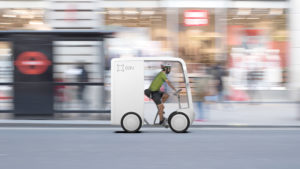 “Getting people out of vans and onto eCargo bikes isn’t easy if they think it’s going to be an awful experience. Being exposed to the elements or being low to surrounding traffic isn’t going to appeal to anyone.

“So, we started with the idea of the outer body of a light commercial van and we added the electric pedal-assist propulsion system.”

He added, “We’ve used all the electric assistance which the regulations permit including a thumb throttle, which we call an ‘e-nertia’ switch, which accelerates the EAVan up to about 3mph. After that, simply turning the pedals provides enough power to move up to 120kgs of payload in the cargo area up to a maximum assisted speed of 25kmh.

“The amount of assistance can be adjusted, and we have our own gearbox so using the EAVan is very easy indeed. We regenerate power into the batteries under braking and free-wheeling to maximise the efficiency of the EAVan which has a range of up to 60 miles or further if you piggyback more batteries.”

“It’s simple, yet elegant and really enjoyable to use. And infrastructure is not an issue. We use a standard household plug to charge our interchangeable batteries so the EAVan is an immediate solution and incredibly cost effective.”

EAVan is built on a unique ‘Cloudframe’ chassis design, which allows it to be fully modular and flexible and makes it suitable for an extremely wide range of uses.

“We travel much slower than we think, especially in towns and cities,” commented Nigel Gordon- Stewart, Chairman and Executive Director of EAV. “There’s no impact on business efficiency using EAVans. They’re highly efficient so it’s mainly a culture change that’s needed and EAVans and EAVehicles are really fun to use and a much healthier solution for people as a whole.”