With fewer than 20 days to go before the UK is due to leave the EU, the British automotive industry is today urging an end to dangerous talk of ‘no deal’ and for all sides to focus energies on an orderly withdrawal to safeguard jobs and the sector’s long-term survival. The call comes as the Society of Motor Manufacturers and Traders (SMMT) publishes the results of a new survey revealing the escalating fears of an industry dependent on free and frictionless trade with the EU. 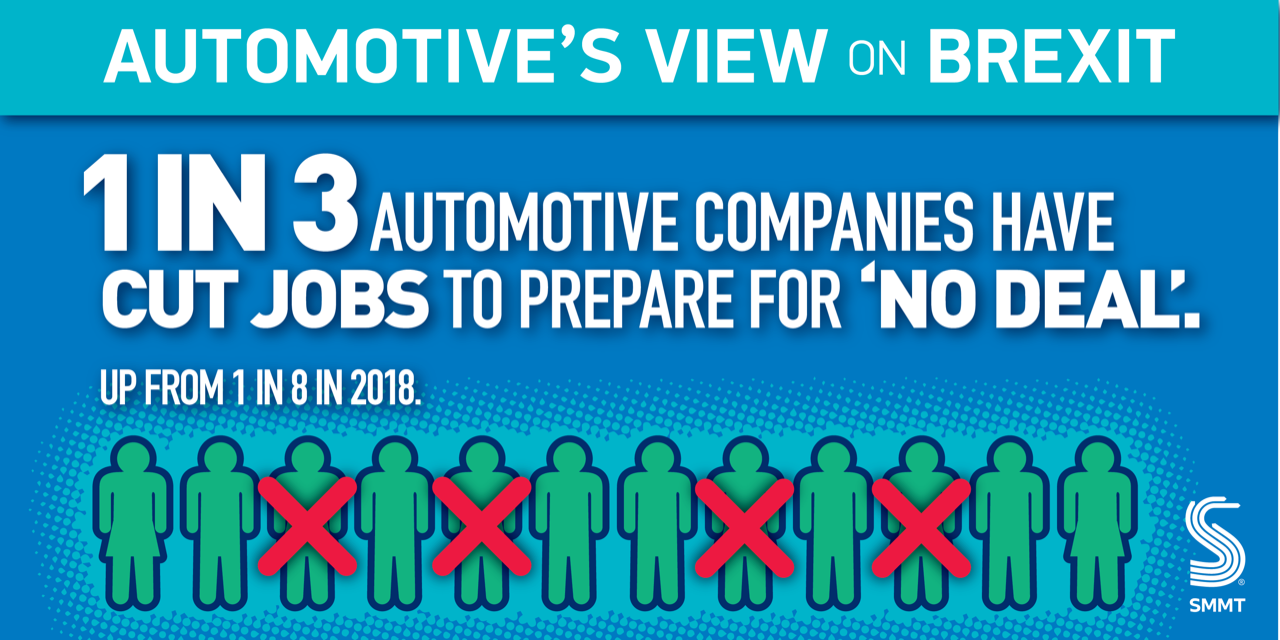 The results are consistent and striking. One in three UK automotive businesses is already cutting jobs, up from one in eight when the survey was last carried out in November 2018. Four-fifths (80.3%) fear leaving the EU without a deal will have negative consequences for their future prospects (up from 74.1% 10 months ago).

Virtually the same number (79.6%) are worried about the impact on their profitability while two-thirds (62.2%) are saying ‘no deal’ will impact their ability to win overseas business and a similar number state that they will be unable to invest in their UK operations.

In a sign that the mere threat of ‘no deal’ has already hurt the UK, 11.8% of firms said that they had already divested from their UK-based operations and 13.4% are relocating operations overseas. Overall, three quarters (77.2%) of firms say that there has already been a negative impact on business even before the UK has left the EU. 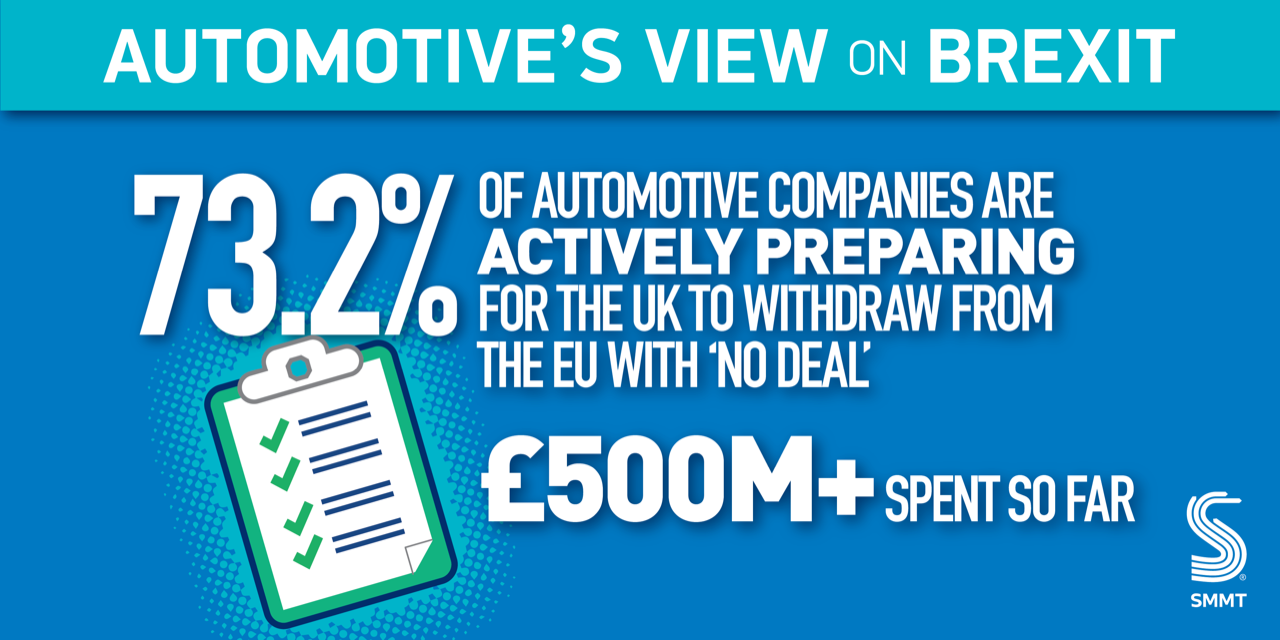 The industry has also taken considerable steps to prepare for the possibility of ‘no deal’, with the vast majority (73.2%) actively preparing for post-Brexit disruption. Almost half have spent money on stockpiling and warehousing to mitigate against the risk of border delays and production stoppage and SMMT’s 2019 UK Automotive Trade Report calculates that a ‘no deal’ Brexit would knock £50,000 a minute off the sector’s economic contribution.4 Meanwhile, a third have made adjustments to logistics and shipping routes, and 26.8% have been forced to invest hard-won profits in new customs infrastructure, despite a recognition that such systems cannot guarantee against border delays in the event of ‘no deal’.

Separate SMMT research has already shown that some of the UK’s biggest automotive manufacturers have spent more than £500 million in an attempt to mitigate at least some of the risks of a ‘no deal’ scenario. The industry cannot, however, fully prepare for all the uncertainties and many will not survive the application of a 10% tariff on finished vehicles as they already operate on wafer-thin margins. At a time when the global automotive industry is striving to develop ever safer, cleaner and more advanced technology, manufacturers in the UK are being forced to waste money on ‘no deal’ survival measures.

As the Brexit clock ticks ever closer to midnight, this survey reveals the bleak future that awaits this vital sector in the event of ‘no deal’. Damage has already been done: investment is haemorrhaging, competitiveness being undermined, UK jobs cut and vast sums wasted on the impossibility of preparing for ‘no deal’. Make no mistake, every day ‘no deal’ remains a possibility is another day of lost investment, another day that makes it harder to recover investor confidence in the UK.

As yet, the damage is not irreversible. But we need a deal. A deal that, in the short term, enables a “business as usual” transition for as long as it takes to negotiate and implement the future trading relationship. In the longer term, that deal must replicate all of the benefits we currently enjoy which means an ambitious deal that delivers free and frictionless trade. UK jobs, innovation, trading strength and economic growth all depend on the automotive sector so we urge all parties to get a good deal done before it is too late.

Automotive is the UK’s single biggest exporter of goods, trading with some 160 countries worldwide, and accounting for more than 14% of total exports. The sector is one of the country’s most valuable economic assets, directly responsible for putting food on the tables of the families of 168,000 people, supporting communities and delivering an annual £18.6 billion to the public purse – more than the NHS’ total annual spend on medicines.5 Leaving the EU without a deal would jeopardise this, causing serious economic damage and putting thousands of jobs at risk. 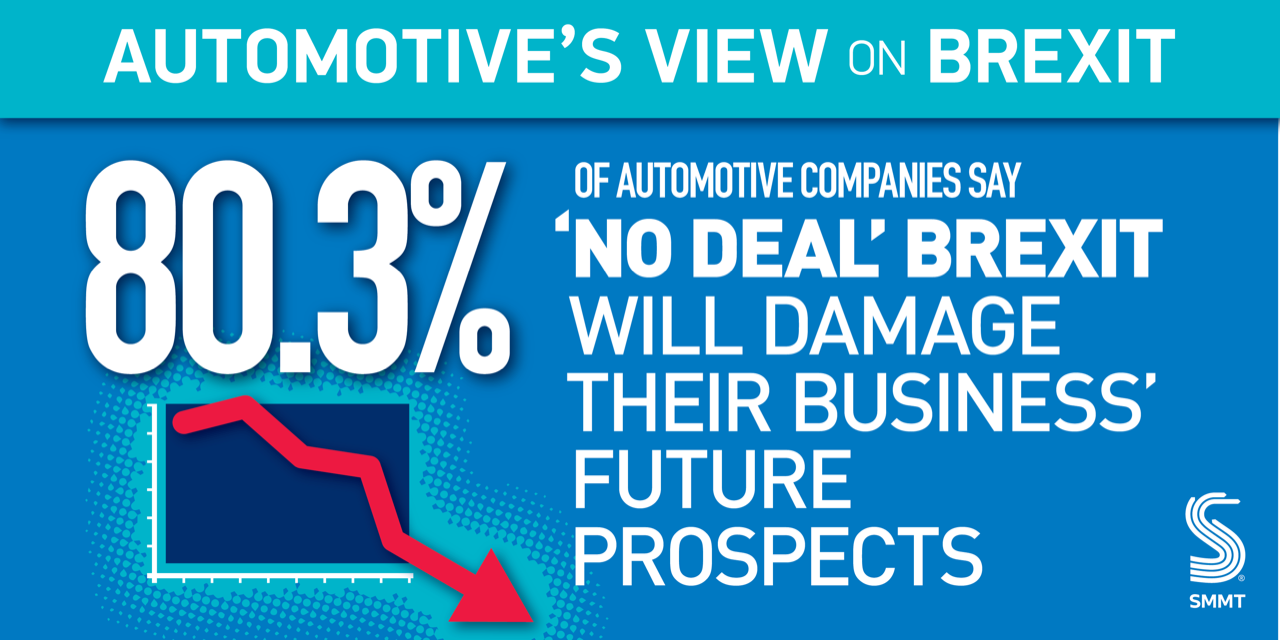 1. SMMT Member Brexit Survey – 80.3% vs 74.1%; one in three versus one in eight. Survey results based on the responses of 158 SMMT member companies to an online poll conducted in 2019.
2. SMMT member research conducted 2019.
3. Based on the application of a 10% standard tariff on cars exported to and imported from the EU.
4. 2019 UK Automotive Trade Report: https://www.smmt.co.uk/wp-content/uploads/sites/2/2019-UK-AUTOMOTIVE-TRADE-REPORT.pdf
5. £17.4 billion in 2017 – https://www.kingsfund.org.uk/publications/rising-cost-medicines-nhs