The first operators to add DAF’s CF Electric to their fleets have now clocked up a combined mileage of more than 150,000 kilometers – enough to travel around the earth four times.

A total of six fully-electric trucks have been in operation for around a year with DAF customers including Jumbo, Simon Loos and Tinie Manders Transport in the Netherlands and Rhenus Group in Germany.

This limited trial has allowed DAF and its customers to gather real-world operational data and the brand says it has now reached a point where it can put the model on wider sale.

“We have now reached the point where we can start to sell the CF Electric in limited numbers,” said Richard Zink, member of the Board of Management and responsible for Marketing & Sales. 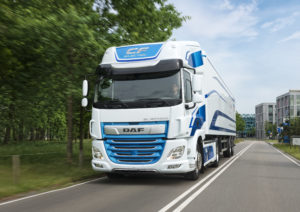 “Think of a few dozen units on an annual basis. In order to guarantee excellent quality, we start up production in a controlled way. Simultaneously, we can thoroughly build up our service network, step-by-step. The CF Electric tractor unit is now available for customers in the Netherlands, Belgium and Germany’s North Rhine-Westphalia. Depending on the local battery charging infrastructure and after-sales possibilities, sales in other parts of Europe will be considered.”

According to DAF, the trial has helped customers to determine the business case of an electric truck and experience how it performs in the real world. It says that while customers were initially using only a limited part of their CF Electric’s 100 kilometres of range, some transport operators now drive around 250 kilometres a day with the vehicle.

“It is a matter of planning your trips cleverly,” said Richard Zink. “The ability to quickly charge the batteries – with the right equipment fully charged in just over 30 minutes – means that additional kilometres are available quickly if required.