Across the country, many different approaches are being taken to coax commuters out of their cars and onto the bus network.

From free park and ride to the introduction of congestion charges and the roll-out of on-demand services, towns, cities and regions are all trying to achieve the same goal – encouraging the use of public transport.

Now, independent watchdog, Transport Focus, has published new research, which could give valuable insight into the issues that act as a barrier to increased passenger numbers.

Its report Buses on Highway England’s roads: meeting the needs of passengers and bus companies outlines the findings of this research, which involved detailed conversations with bus operators and service users in Bristol and Brighton. 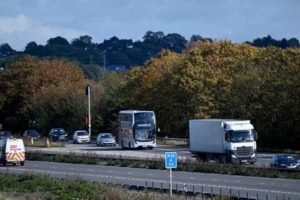 It found that bus travel, for commuters and leisure-users, is very often the preference, allowing them to bypass the worst of the traffic, avoid the need to find a parking space and to save money.

But conversely, congestion, and the inability of buses to navigate through or around it in many places is also seen as one of the biggest drawbacks.

The key findings of the research make for interesting reading:

The bus is often preferred to the car as it is seen as more convenient.

Passengers told researchers they use the bus to avoid sitting in the car in traffic and so they do not have to find a place to park in crowded town centres.

In addition, participants in the research said that it is usually cheaper to use the bus, particularly when compared with all the costs associated with driving.

This echoes other Transport Focus research showing that convenience and cost are generally at the heart of the decision of whether to choose the bus or car.

When buses are working well, passengers appreciate the comfort of the surroundings and the ability to enjoy the journey at their leisure.

They also appreciate the additional features which may be available, such as free Wi-Fi and charging points, the ease of buying tickets and of finding timetable information.

Passengers also see their use of the bus as a social good, with bus travel a more efficient and environmentally friendly way of transporting large numbers of people.

Passengers surveyed recognised that existing bus priority measures do help buses avoid congestion in some places. However, the impact and unpredictability of congestion is also their biggest area of concern and counts against bus travel.

Passengers are very supportive of priority measures which gave buses priority and allow them to continue their journey with ease.

Top of the list are bus lanes but measures such as ‘smart’ traffic lights, are also well received.

As a result of its research, Transport Focus is now calling on Highways England to:

Anthony Smith, chief executive Transport Focus, said, “Passengers and bus companies tell us Highways England’s network is often the fastest, smoothest part of their bus journey but congestion has considerable impact on the day-to-day lives of those who use buses.

“Congestion is clearly being felt by bus passengers. This research should help Highways England understand these concerns and better meet the needs of these customers.”