UK car manufacturing fell -37.6% in March, according to figures released today by the Society of Motor Manufacturers and Traders (SMMT). Just 78,767 vehicles left factory gates in the month, some 47,428 fewer than the previous year, as the coronavirus crisis caused UK car plants to close, resulting in more than 140 days-worth, in total, of lost production.3

Output for the domestic market declined -36.8%, while exports fell -37.8% as the pandemic forced showrooms to close around the world. Demand was particularly weak in major export destinations, including the US and EU where many key markets were shut for the majority of the month, with exports down -39.3% and -37.7% respectively. There were some encouraging signs, however, with shipments to China rising 2.3% as lockdown measures began to ease. However, overall output for the sector rounded off the first quarter down -13.8% with 319,252 vehicles leaving factory gates compared with 370,289 in the same period in 2019. 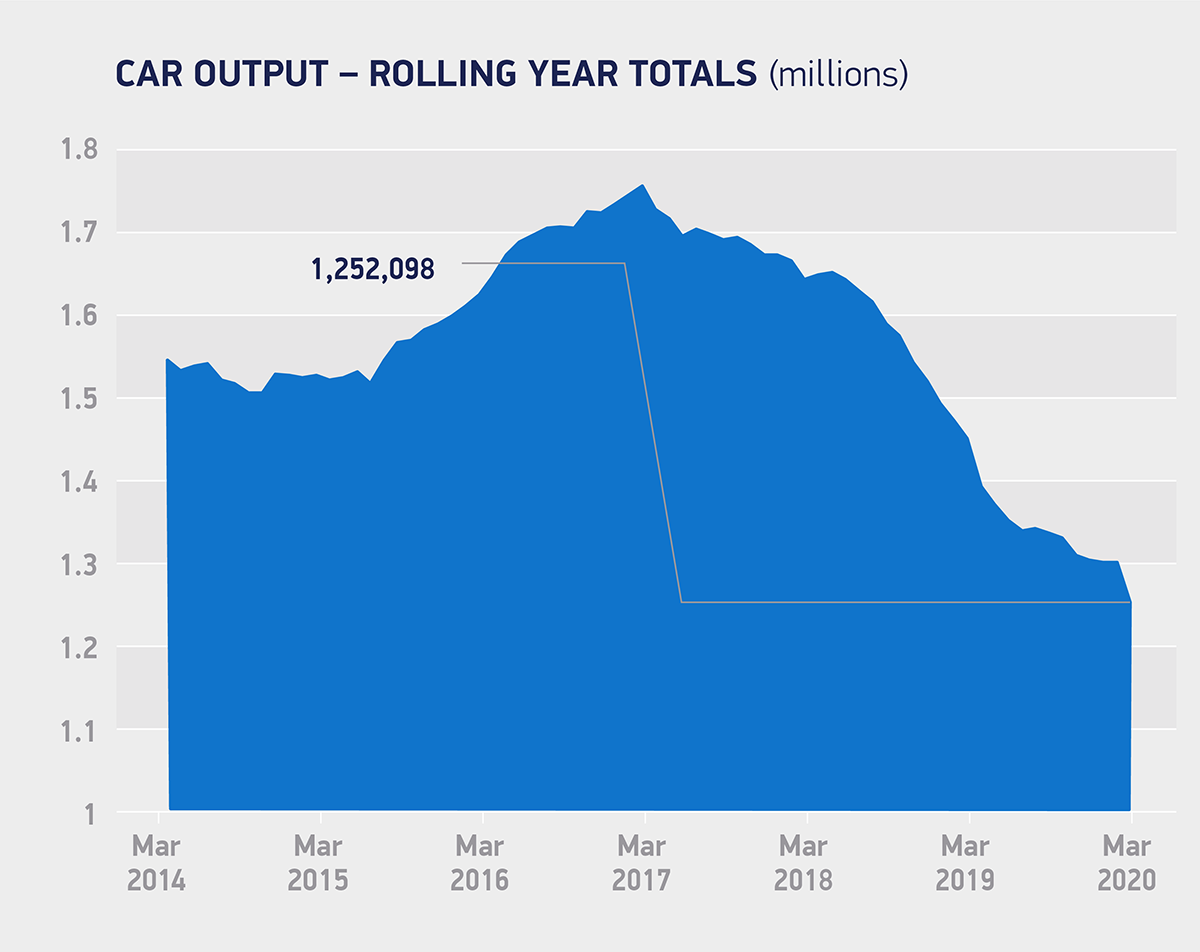 The latest independent analysis suggests that the crisis could result in a loss of some 257,000 units this year across all UK plants if factories stay closed to the middle of May. This amounts to an estimated cost to industry of some £8.2 billion, equivalent to around 20% of UK car makers’ combined annual turnover.4 The outlook could be much worse, however, if subsequent demand is weak and the speed at which production lines are able to ramp up is constrained. The first step, therefore, is to get car retail premises open as soon as the situation allows.

The news comes as SMMT publishes the results of a survey looking at the impact of Covid-19 on UK businesses across the automotive sector.5 The closure of showrooms across the world has forced car plants to pause operations for more than a month now, and the impact on turnover has been severe, with half (50.5%) of automotive manufacturers responding reporting that revenues thus far have fallen by more than a 50%.6

Government schemes, including the Coronavirus Job Retention Scheme (CJRS), have provided a lifeline for many businesses, with almost two-thirds (60.6%) of the full time automotive manufacturing workforce furloughed, safeguarding thousands of highly skilled jobs.7 Although business interruption loans are now starting to pay out, however, just 17.0% of applicants reported success, with 58.0% of respondents stating they were either ineligible or unsuitable.8

With more than a quarter (26.0%) of all companies responding reporting cash reserves of less than three months, and 29.3% projecting recovery to take between 12 and 24 months, more needs to be done to get cash flowing and to help the sector get back to business.9

UK Automotive is fundamentally strong but, as these figures show, it is being tested like never before, with each week of shutdown costing the sector and economy billions. Government’s emergency measures are helping keep many companies afloat and thousands of people in jobs, but liquidity remains a major concern and will become even more stretched as the industry begins to restart.

To get production lines rolling, we need a package of measures that supports the entire industry. We need coordination and collaboration with government, the workforce and wider stakeholders to unlock the sector in a safe and sustainable way. This will include new workplace guidance, additional measures to ease cash-flow and help furloughed colleagues back to work, as well as demand-side measure to help encourage customers back into the market. This should be seen as long-term investment into the underlying competitiveness of an industry critical to the health of the economy and the livelihoods of thousands of households right across the UK.

With some key export markets, including China, Germany and the US, now starting or planning to re-open, manufacturers in the UK are making detailed preparations for employees to return safely to work over the coming weeks. 57.0% of all businesses responding to the survey said they plan to resume operations by mid-May but there are some key challenges that need to be overcome. Two thirds (66.7%) highlighted UK market readiness as a pre-requisite, while almost half (48.9%) called for more flexibility in the CJRS to allow for short-term working during production ramp-up and 56.0% flagged liquidity.10

A successful restart of the UK automotive sector will require a clear plan and close coordination and cooperation between government and industry built on four pillars. These include re-opening automotive retail and stimulating demand, ramping up safe and sustainable production, securing and supporting resilient supply chains, and ensuring a supportive regulatory framework is in place.

This package will help to unlock the full UK automotive production system – from retail, finance, logistics to production, assembly, service and repair and research – a wider industry that supports more than 820,000 jobs in all parts of the UK and is worth some £101 billion annually in global trade.