Peugeot and Citroen electric vans to go on sale this year

Peugeot and Citroen have revealed that their fully electric plug-in vans the e-Expert and the e-Dispatch are due to go on sale in the UK later this year. 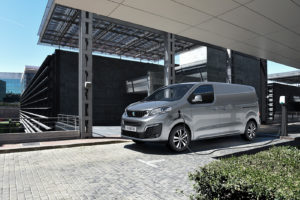 Both vans will offer payloads of up to 1,275Kg, up to one-tonne towing capacity and both will have a range of 143 or 205 miles depending on version. They also feature a 100% electric motor with a maximum power of 135PS and a maximum torque of 260Nm. Top speed for both is 80mph while 0-62mph can be achieved in 13.1 seconds.

Citroen’s e-Dispatch looks identical to a regular Dispatch, other than a charging point mounted on the front wing and discreet badging. Load volume is unaffected by the electrified powertrain, with the battery pack integrated into the van’s chassis.

From 2021, Citroen says its entire LCV range will include electrified models alongside efficient internal combustion engines. The e-Dispatch will be joined by a 100% electric version of Relay at the end of the year and an electric Berlingo Van next year.

The XS version (4.6m length) provides a 5.1 cubic metre load space and is available with the smaller 50kWh battery, and like the Peugeot, it yields a range of 143 miles while the M version is 4.95m long and can be specified with the 50kWh battery or the larger 75kWh unit, which increases the range to 205 miles.

XL versions are 5.3m long and provide up to 6.6 cubic metres of load space. These are fitted with the larger battery only.