Driving to attract more women into the transport sector 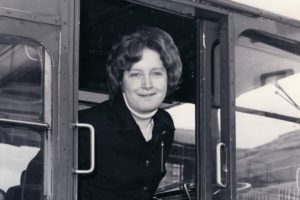 In 1974, 22-year-old Jill Viner did something extraordinary: she stepped aboard a bus, got behind the wheel, set off on her route and, in so doing, fulfilled her childhood dream of becoming a bus driver – and London’s first ever female bus driver.

She went on to drive London Transport buses from Norbiton bus garage until it closed in 1993, but in a career that lasted almost 20 years, Jill unwittingly became a trailblazer for many women.

Nowadays, passengers do not double-take when you climb aboard a bus with a woman at the wheel, unlike the 1970s where such a role was regarded as a ‘man’s job’. That said, there is still plenty to do in an industry where women employees are still seriously under-represented.

Indeed, in the transport sector the numbers are unbalanced. According to 2018 Office of National Statistics (ONS) research, there are 120,000 male bus and coach drivers, compared to 9,000 women. And, if you take the number of UK drivers registered with the Freight Transport Association as a guide the picture is even more unequal: of the 315,000 drivers registered, only around 2,200 are female.

However, steps are being taken to address the gender imbalance.

Last week the 2020 Amazon Everywoman in Transport and Logistics Awards revealed 60 finalists for its awards event where the winners will be announced in October.

Returning for its thirteenth year, this key award in the logistics calendar aims to showcase the crucial positions women hold in transport and logistics, helping to redefine and challenge perceptions of a male-dominated sector.

Maxine Benson, co-founder of Everywoman, said, “With the Coronavirus outbreak shining a spotlight on how crucial our transport and logistics sector is, celebrating role models and creating a strong pipeline of female talent is more important now than ever before.”

Of course, these awards celebrate the achievements of women already in the industry, but what is being done to attract more into the sector?

In 2005 the London Chapter of WTS International in the US was founded specifically to address this, but in 2017 the Chapter became independent and changed its name to Women in Transport. Its key objective is to encourage more women into the sector, providing greater support and an opportunity to flourish.

Katie Hulland, President of Women in Transport, told TNB, “While there are many women’s equality networks and groups, Women in Transport is focused specifically on employment, career advancement and retention of women within the industry.

“There is a vast body of evidence to prove that more diverse and inclusive businesses perform better, achieve a higher employee engagement rate, have improved safety performance, increased client and employee retention and better operating margins.”

But it’s not just independent campaign groups that are trying to address the imbalance. Last year, Go-Ahead, which operates several bus companies in the UK, Ireland and Singapore, launched a drive to attract more women drivers. The group has since seen a jump in numbers of female applicants with more than a third (35%) of graduate applications in 2020 coming from women – up from 23% in 2019.

Currently 11% of Go-Ahead’s 15,500 bus employees are female, reflecting the traditional male dominance in the sector, but it is serious about increasing the number of women in its organisation and has set a target to increase female representation in its bus companies from 11% to 20% by 2025 and now has a gender-balanced board with more than 50% female representation. It also plans to recruit 1,000 women bus drivers in London. If successful with its recruitment plans, 20% of Go-Ahead’s bus driving workforce would be female.

People Director at the Go-Ahead Group, Siobhan Morrison, said, “Women and men of all ages and backgrounds travel on our buses. We want our workforce to reflect the diversity of our passengers and communities, so there are great opportunities for women to work in our bus businesses.

“We are challenging stereotypes and leading the way in securing skills from the widest possible talent pool.”

Bus company Stagecoach London was also acutely aware of the gulf between the numbers of female bus drivers in their employ compared to the number of male drivers, and it was keen to address the issue. Indeed, with less than 10% of all applications for bus driving jobs coming from women it embarked on a strategy to raise awareness and increase its number of women drivers.

The company subsequently set up its Women Behind the Wheel campaign and invited Ferne McCann of The Only Way is Essex reality show and This Morning fame to train for her Passenger Carrying Vehicle (PCV) licence. This coincided with a social media campaign detailing McCann’s experiences behind the wheel.

As a result, Stagecoach saw applications from women rise by approximately 30% and a resultant increase in female bus drivers within its workforce.

And there are real signs of a shift more broadly in transport, according a research by Auto Trader.

Research by the used car website revealed that female applications for C1 or C1E licences, which qualifies drivers to get behind the wheel of heavy vehicles between 3,500 and 7,500kg, rose by 29% from 2014-2017. The study of more than 2,000 van buyers also revealed that some 32% of those are women.

So, perceptions are slowly changing, and more women are joining the industry, but the road is long. In a study commissioned by bus company, First Bus, a quarter of women questioned said they actively avoided careers, such as bus driving, because they are perceived as ‘men only’.

Sue Whaley, HR Director for First Bus, concluded, “There’s no escaping the fact that men outnumber women in the bus driving world, but more and more women are proving it’s a job they’re great at – and that bus driving is a career that suits them.”