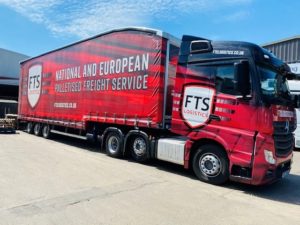 The restructure of its senior management team follows a period of “unprecedented” acquisitive and organic growth for the group, which is formed by four divisions: Forward Trucking Services (FTS); FTS Logistics; Stand & Deliver Transport; and FTS Events. This structure provides the group with specialisms in linehaul, contract haulage and palletised freight.

FTS director, Stephen Mackay, said, “We are extremely proud to be cementing the team for this new phase of our development. Pete and Andrew bring both huge experience and industry knowledge, and together they will drive our growth and reintroduce our status as one of Hertfordshire’s premier logistics companies.”

The group stated that the track record of both appointments speak for themselves, being “well-respected and well-known within our industry.”

Peter Samuel added, “I’ve been given a mandate to lead The FTS Group into the next phase of the company’s development. Supporting and developing our group companies has top priority as we push the envelope on our haulage, storage and added value offerings.”