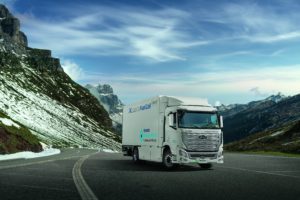 A report published by Fitch Ratings suggests that penalties for failure to meet new emissions targets in 2025 are encouraging truck manufacturers to invest in hydrogen fuel-cell technology. The technology focus is being driven, said the report, by the EU’s adoption of new HGV emission targets designed to meet carbon-neutrality by 2050, meaning a 15% average reduction from 2025 and 30% from 2030.

Fitch Ratings claimed that heavy-duty vehicles are responsible for around a fifth of CO2 emissions from road transport in the EU and around 6% of total EU carbon emissions. It stated that hydrogen fuel cells are “the leading technology truck-makers are investing heavily in”.

According to the report, “Fitch Ratings considers the high cost of manufacturing and operating fuel-cell trucks as one of the main obstacles. Costs will have to come down significantly before production could be ramped up, which means a long-term development horizon. If development of fuel-cell trucks continues as planned, mass production could become achievable in the next decade, while more than 40% of heavy-duty trucks could be produced using this technology in 2050.”