A new vision for truck safety 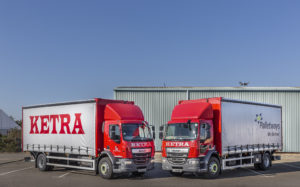 The Direct Vision Standard (DVS) for commercial vehicles over 12 tonnes was introduced in March to further improve road safety in London. Now operating 24/7 across the capital, the standard measures the driver’s direct field of vision from their cab, using a star system from 0 to 5.

Vehicles that meet the minimum star rating are granted a free electronic permit enforced by automatic number plate recognition, with non-compliant operators handed a penalty charge notice of £550 per day.

Around 90,000 permits have been issued, including to HGVs which have had additional systems installed to meet the standard.

These included: cameras covering blind spots linked to a video display in the cab; an audible warning when turning left; motion sensors covering the sides of the lorry at low speeds and a prominent warning on the back of their vehicle.

However, Brigade Electronics, which supplies hi-tech equipment for operators, believes safety must be based on a mix of direct vision and indirect vision and that the use of cameras, sensors and reversing alarms by drivers should remain vital tools in preventing accidents.

Chris Hanson-Abbot OBE, founder and chairman at Brigade said: “No one is doubting the importance of direct vision, but it relies on the driver looking in the right place at the right time to see the potential danger.

“Safety technology is more than just direct vision. It includes passive and active systems that alert the driver to something in their blind spot – which encourages them to look.”

Unlike other vehicle safety initiatives such as the Fleet Operator Recognition Scheme (FORS), the DVS is mandatory for all operators.

However, if a fleet is FORS Silver or FORS Gold accredited, it will automatically comply with the current DVS regulations.

In response to customer demand, DAF has made available a new, factory-fitted camera and sensor system, developed in partnership with Brigade, to help improve road safety, especially for vulnerable road users, and comply with DVS.

Available on DAF CF and XF tractors and rigids, equipment comprises a nearside-mounted camera with in-cab monitor, nearside proximity sensors and an audible left-turn warning signal for when the left-turn indicator is activated.

DAF Marketing Manager, Phil Moon said: “By providing factory-fitted equipment, operators can be confident that the installation is in accordance with the manufacturer’s own robust quality standards, consistent across all DAF CF and XF rigids and tractors, and covered by the vehicle’s standard two-year warranty.”

Several freight operators including SUEZ Recycling and Recovery and FM Conway and major projects such as Tideway – a “super sewer” project for the capital – have led the way in specifying five-star vehicles for London. 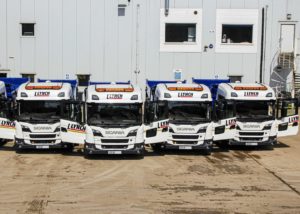 FM Conway runs tipper-grabs based on the low-entry Mercedes-Benz Econic chassis, which offers major safety advantages compared to a conventional truck and are equipped with safety cameras.

The Econic has a deep, panoramic windscreen, a fully-glazed kerbside door and a low seating position.

This means the driver’s field of vision is significantly improved, making it much easier for them to see and make direct eye contact with other road users, including particularly vulnerable bike riders.

Peter Parle, Senior Transport Manager, FM Conway, said: “The DVS five-star rated Mercedes and Dennis tipper grabs that we use give us high performance at the same time as the safest cab view for our drivers and for the cyclists and pedestrians they share the streets with.”

London-based construction haulier L Lynch has also invested in new five-star DVS-rated rated Scania low entry urban tippers, primarily for muckaway use on projects in and around the capital.

The low entry design means driver visibility is greatly improved, thanks to the lower cab and wide view from the driver’s seat.

Access to site and adverse terrain is assisted thanks to factory-fitted air suspension: raising the cab by 120mm.

Steve Bremner – Fleet and H&S Director said: “Providing the best possible service to our customers means investing in the safest and most efficient vehicles.

DVS and Safety Permit scheme standards are due to tighten in October 2024 when the minimum star requirement for gaining a permit to drive in London will rise to three stars and above.

All HGVs that fall below three stars will need to fit a ‘progressive safe system’ which takes into account any additional technology or safety equipment not currently available.

Specifications have so far not been released, however, there is a possibility this could entail technology such as digital black box recorders.

In view of this, London-based Ketra Logistics has taken delivery of 14 DAF LF rigids with day cabs from rental firm Ryder, all compliant with the three-star level requirements of the DVS, and replacing a non DVS-compliant fleet. 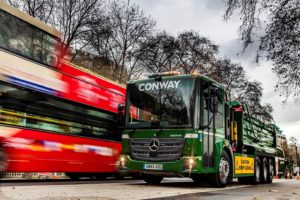 They feature a mix of Ryder’s preferred nearside sensors and audible warning system and Ketra’s choice of camera system.

Its 18 tonne versions also feature a passenger side lower window to increase visibility.

MD, Martyn Young, said: “This new fleet not only means that we’re compliant now, but also when the standard becomes tougher in 2024 and sets the minimum requirement at three stars – and this means we won’t need to worry about retrofitting vehicles or replacing them in three years’ time.”