UK car factories turned out 69,097 units in June, according to the latest figures released today by the Society of Motor Manufacturers and Traders (SMMT). While this was a rise compared with the Covid-depressed June 2020, it still represents the worst June total since 1953 as the global chip shortage, caused by the pandemic, and other factors continued to take a toll on production.1

The performance rounded off a turbulent first six months for UK car production, with the pandemic, new trading rules with Europe and supply issues causing ongoing challenges. 498,923 units rolled off production lines, down -38.4% on the five-year, first-half average representing a loss of 311,160 cars worth more than £8.5billion.2 This reflects how far the sector must go before it can talk about recovery. 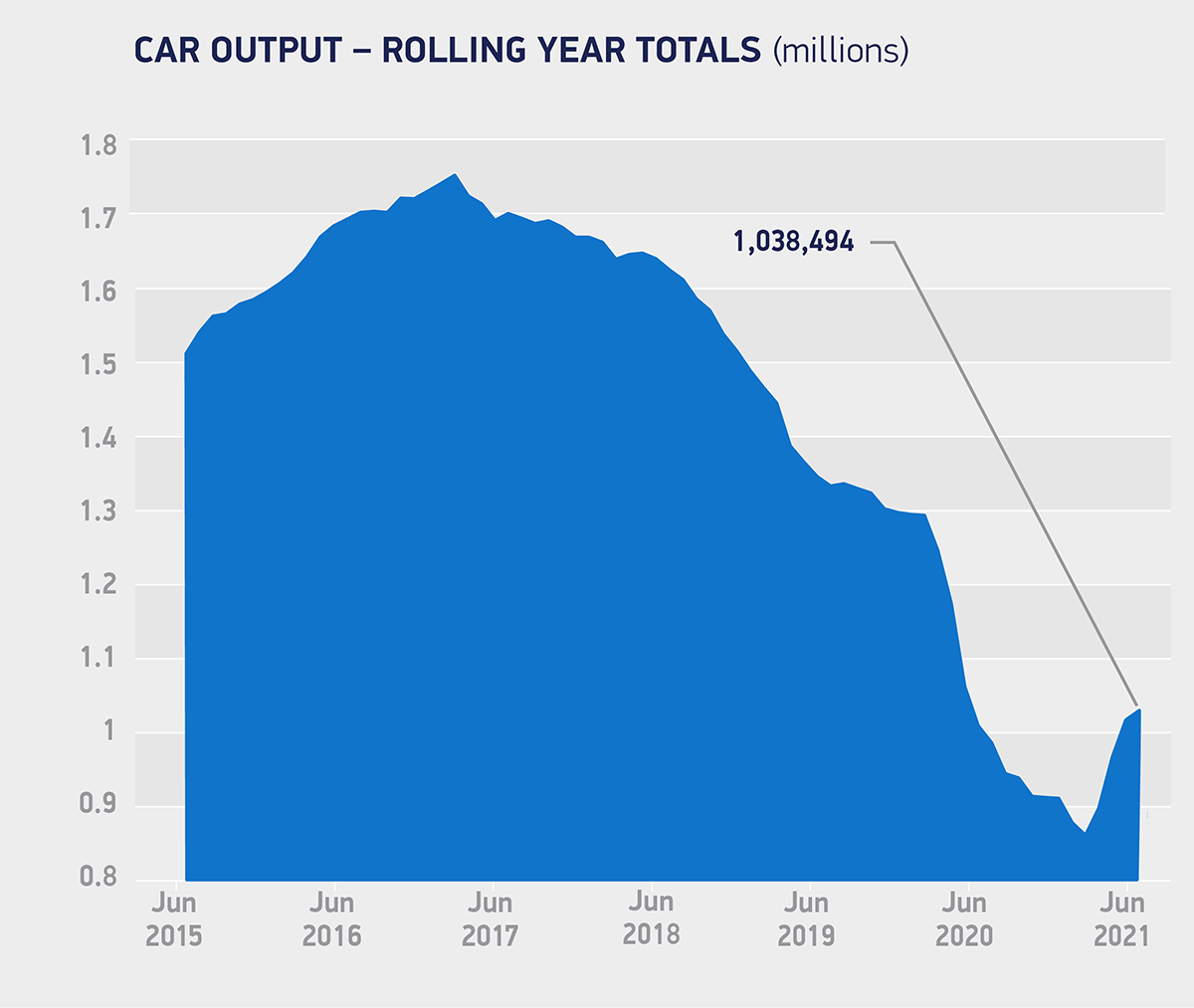 Exports continued to sustain British car manufacturing with more than eight in ten (83.4%) models made here so far this year shipped overseas. More than half of these (51.7%) headed into the EU, with the US the UK’s next most important global market (taking 18.8% of exports) followed by China (7.8%), Japan (1.9%) and Australia (1.8%).

UK production of battery electric (BEV), plug in hybrid (PHEV) and hybrid electric (HEV) vehicles, meanwhile, remained steady year-to-date with around a quarter (22.6%) of all cars alternatively fuelled. However, with the looming end of sale date for new petrol and diesel cars less than nine years away, the industry is challenged to accelerate the transition from fossil fuel to zero emission vehicles. This will require significant investment into vehicle manufacturing, battery production and supply chain transformation for which a clear commitment to enhancing UK automotive competitiveness is essential.

Despite the easing of Covid restrictions, manufacturers are experiencing staff shortages due to self-isolation arising from notification of contacts outside the workplace. This is putting production at risk and is another drag on the sector’s recovery. Indeed, an independent study forecasts the negative impact on planned UK car production, primarily due to the worldwide shortage of critical semiconductors, could be as much as 100,000 units this year.3

While the UK automotive industry continues to suffer the effects of the global pandemic, with first half year production down significantly and a tough few months looming, the sector has the capability to recover. The latest investments into new models and battery production show a bright future is within reach, yet the industry still faces headwinds most notably from global semiconductor shortages and staff absenteeism as a result of staff being ‘pinged’.

Businesses have ensured their facilities are Covid secure but urgent action is needed, such as bringing forward the 16 August target date for exempting fully vaccinated adults from self-isolation and introducing a “test to release” scheme to support those employees not yet fully vaccinated.

Operating conditions are still challenging, however, highlighting the need for specific actions to help competitiveness, such as creating a Build Back Better Fund and the alleviation of high energy costs, to get the sector back on track and towards the volumes that make UK facilities viable.

The current situation for UK manufacturers remains difficult with the supply uncertainty expected to last into 2022. Despite this, there have been recent announcements of significant long-term investment into UK Automotive, including in Sunderland, Ellesmere Port and Norfolk, investment which is much needed following four years of Brexit uncertainty and some recent factory closures.

Much more such investment is needed, however, if the British vehicle manufacturing sector is to remain in step with its overseas rivals. ‘Full Throttle: Driving UK Automotive Competitiveness’, a report launched recently by SMMT, sets out a series of steps needed to attract such commitments and assure the sector’s long-term competitiveness. Recommendations include for the establishment by government of a ‘Build Back Better Fund’ for the manufacturing sector, the construction of gigafactories with 60 GWh of capacity and the installation of 2.3 million public charge points by 2030.