UK car production fell -28.7% in November to 75,756 units, according to the latest figures released today by the Society of Motor Manufacturers and Traders (SMMT). It was the fifth consecutive month of decline and represents the worst November performance since 1984 as UK car makers continue to wrestle with the worldwide shortage of semiconductors.1 The figures also reflect the loss of output arising from the closure of a UK car factory in the summer, a situation that will impact year-on-year comparisons until July 2022.

In November production for both domestic and overseas markets declined, down -18.8% and -30.4% respectively, as 30,487 fewer cars rolled off factory lines. Exports accounted for more than 80% of all cars produced last month, reinforcing the need for smooth international trade, especially with the EU, as new customs controls with the bloc come into effect on 1 January 2022. Six-in-ten (60.3%) cars shipped overseas in November headed into Europe. Asia, meanwhile, took 15.6% of UK car exports, the US 13.4% and Australia 1.2%.

Continuing the recent trend, British production of battery electric, plug-in hybrid and hybrid cars took a record share of production, accounting for around a third (32.7%) of all cars made in the month, and more than a quarter (25.5%) over the year-to-date. Battery electric vehicle output, in particular, was up in November by 52.9% to 10,359 units, hitting a new high of 13.7% of all production, more than double the level a year ago. 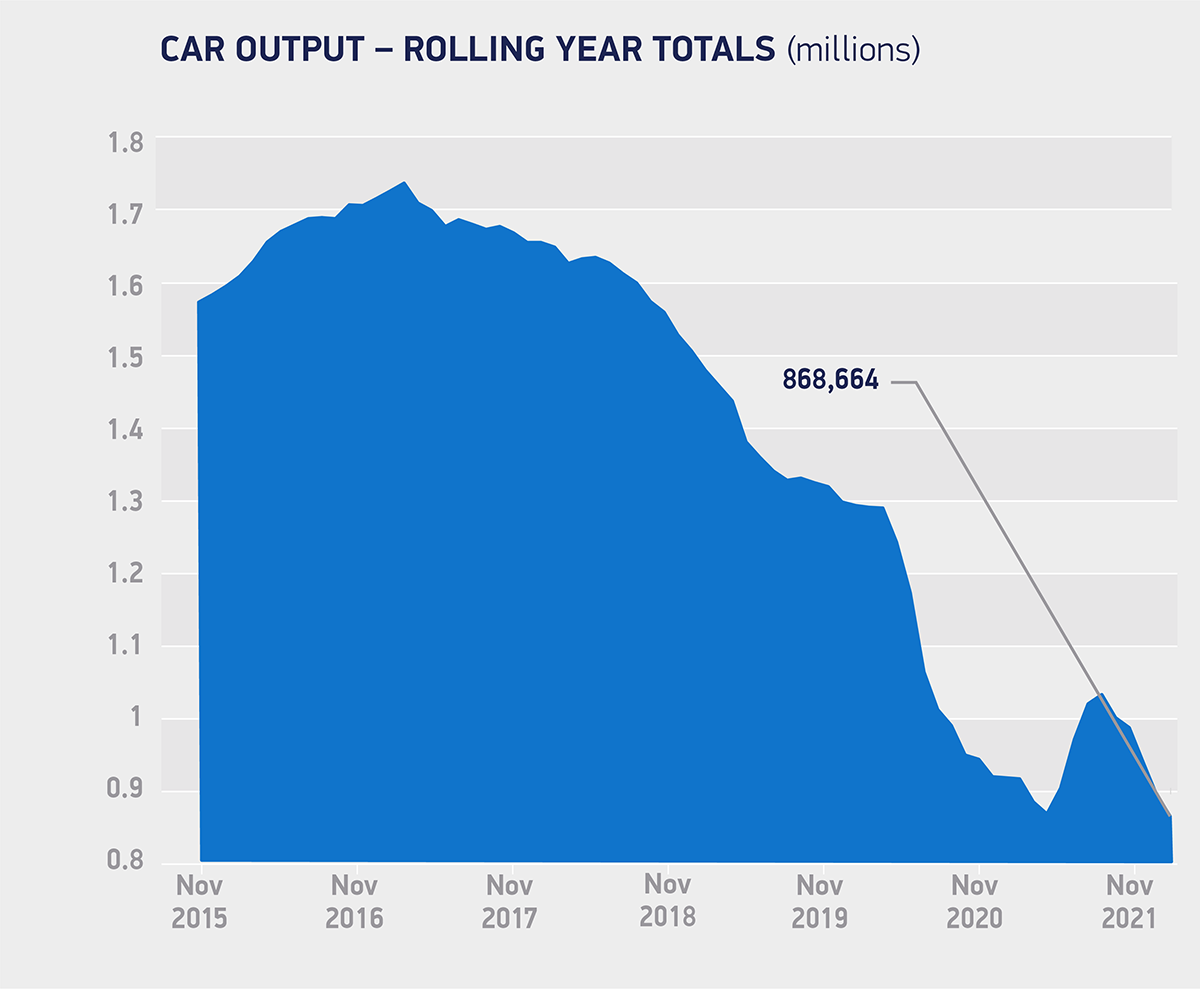 These are incredibly worrying figures, underscoring the severity of situation facing the automotive industry. Covid is impacting supply chains massively, causing global shortages – especially of semiconductors – which is likely to affect the sector throughout next year. With an increasingly negative economic backdrop, rising inflation and Covid resurgent home and abroad, the circumstances are the toughest in decades. With output massively down for the past five months and likely to continue, maintaining cashflow, especially in the supply chain, is of vital importance. We have to look to government to provide support measures in the same way it is recognising other Covid-impacted sectors.

The industry is as well prepared as it can be for the implementation of full customs controls at UK borders from 1 January but any delays arising from ill-prepared freight or systems will place further stress on businesses that operate ‘just in time’. Should any problems arise, contingency measures must be implemented immediately to keep cross border trade flowing smoothly.