UK car production fell -41.3% in February, with 61,657 units made, according to the latest figures released today by the Society of Motor Manufacturers and Traders (SMMT). 43,351 fewer cars were made than in the same month in 2021, primarily due to the persistent global shortage of semiconductors causing some factories to pause production, and the loss of output following the closure of a major plant in Swindon last summer.

In what was the weakest February for UK car makers since 2009, production declined for both the domestic and overseas markets, down -35.8% and -41.8% respectively.1 Exports accounted for more than eight in 10 cars made, with the majority of shipments (62.4%) heading into the European Union, equivalent to 31,673 units. The US, in comparison, took 11.0% of exports, and China 8.7%. 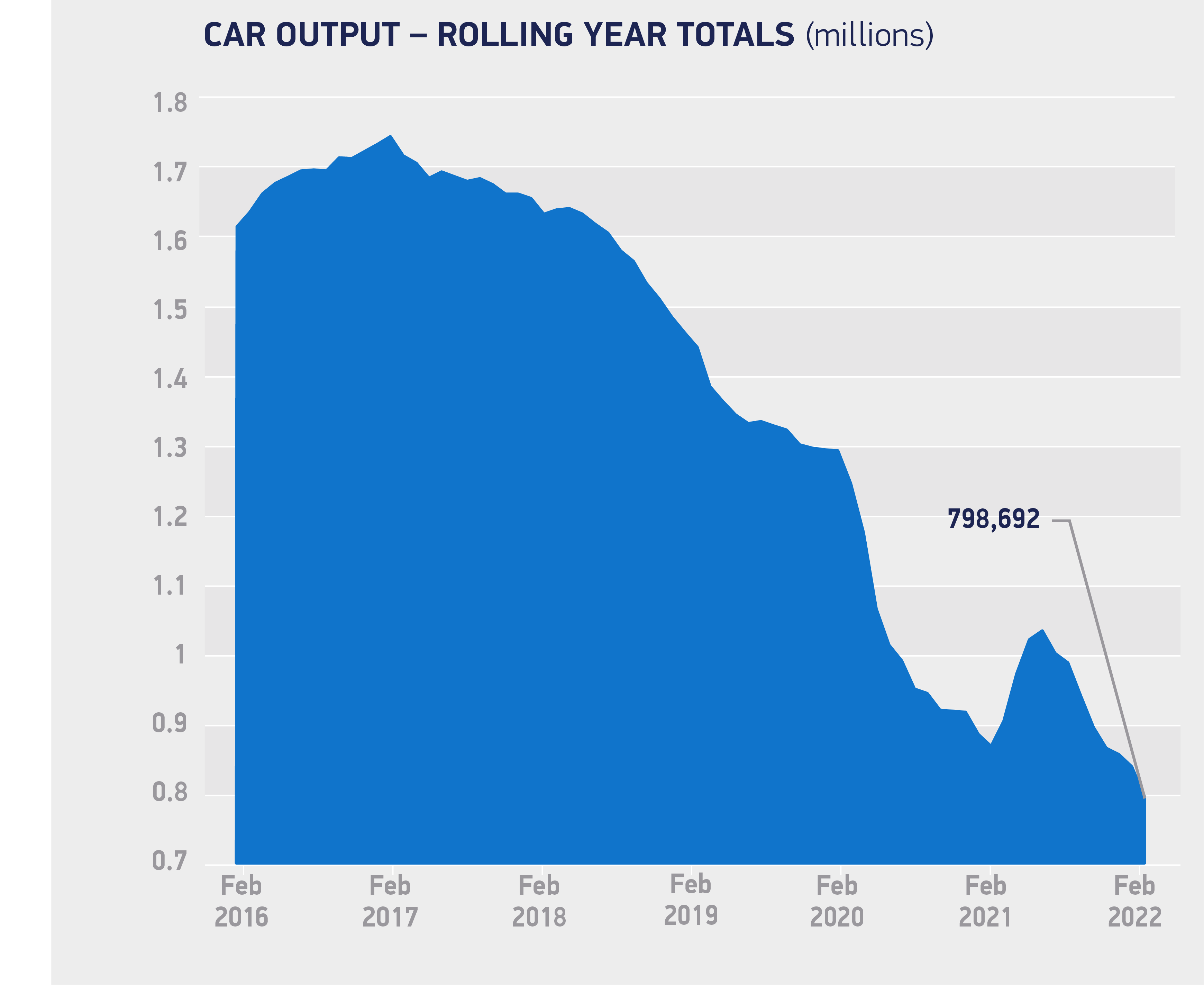 UK production of the latest electrified vehicles continued apace with plug-in hybrids, hybrids and battery electric cars combined representing more than a quarter (25.8%) of all production in the month, or 15,905 units. The news comes after fresh SMMT analysis published this week revealed some £10.8 billion has been committed to UK electric vehicle production and gigafactories since 2011.2

This investment has resulted in the production of almost a quarter of a million alternatively fuelled cars over the past decade, but fresh commitments to domestic battery production are now essential if volumes are to grow further. The current trajectory aims to boost capacity to 41GWh by 2027 but, if the UK is to produce around one million electric vehicles a year, 60GWh will be needed. This underscores the importance of creating favourable investment conditions for the sector, notably in terms of access to skilled labour, competitive fiscal regimes and – most urgently – competitively priced clean energy.

The automotive industry is undergoing its most radical transformation in more than a hundred years, but manufacturers are simultaneously facing the most extreme operating conditions as global economic headwinds drive up costs and constrain supply. The sector entered 2022 hopeful for recovery, but that recovery has not yet begun, and urgent action is now needed to help mitigate spiralling energy costs and ensure the sector remains globally competitive to encourage the investment essential to growth, job security and the delivery of net zero ambitions.

Against an already tough economic backdrop, the Russian state’s invasion of Ukraine at the end of February represents a further challenge for the UK automotive sector. Although, in 2021, Russia took just 1.1% of UK car exports and Ukraine just 0.5%, many critical raw materials, parts and components, including aluminium, palladium and nickel, which is used in battery manufacturing, and wiring harnesses, are sourced from the region. The sanctions imposed are supported by the industry but raise additional challenges to the sector in the medium to long-term.

1. February 2009, 59,777 cars made
2. Based on analysis of publicly announced investments delivered or secured by vehicle manufacturers and battery producers into UK R&D and production since 2011