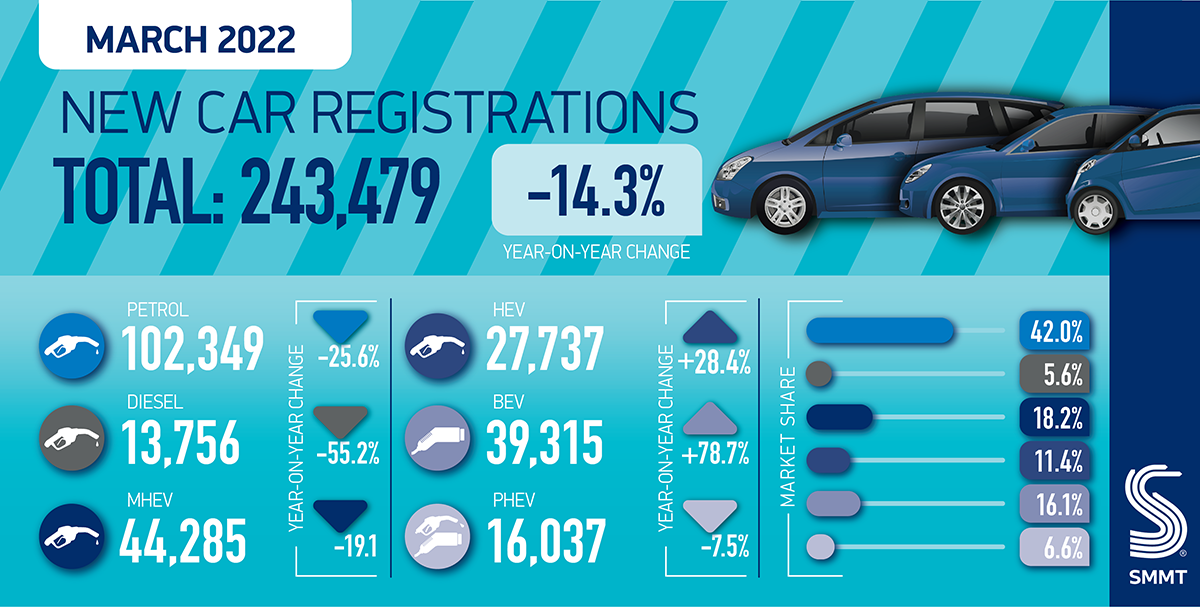 UK new car registrations fell by -14.3% to 243,479 units in March, according to the latest figures from the Society of Motor Manufacturers and Traders (SMMT). Despite manufacturers reporting robust order books during the first quarter, ongoing supply chain shortages – especially of semiconductors – continued to squeeze supply during what is normally the industry’s busiest month as buyers demand the latest numberplate.

This is, therefore, the weakest March since 1998, which was prior to the introduction of the two-plate system.1 Given around 20% of total annual registrations are usually recorded in March, the result is massively disappointing for the sector and underscores the long-term impact the pandemic is wreaking on the industry. In spite of the rollback of pandemic restrictions, which limited the industry to ‘click and collect’ in the first part of 2021, overall Q1 registrations for 2022 were down -1.9%. 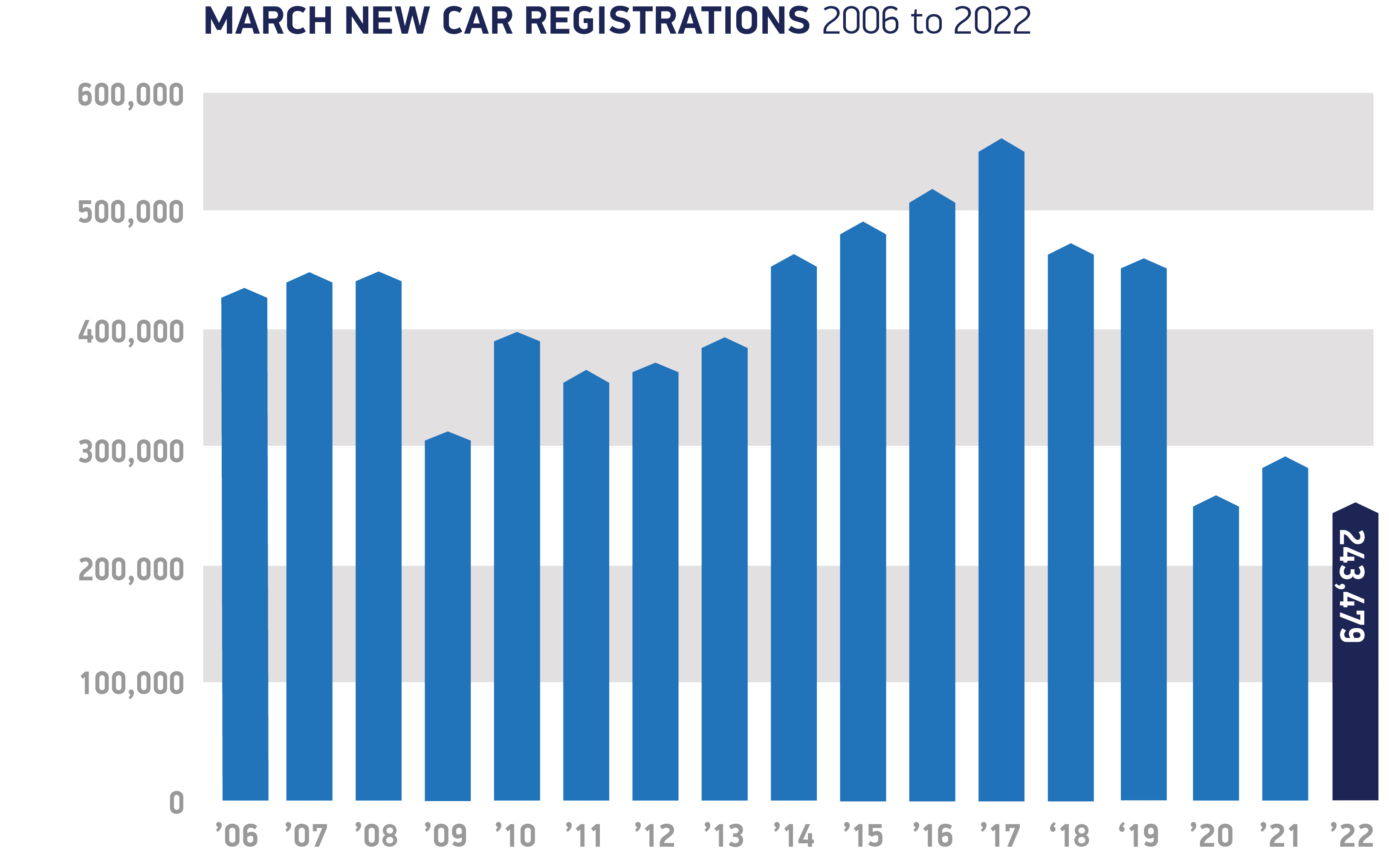 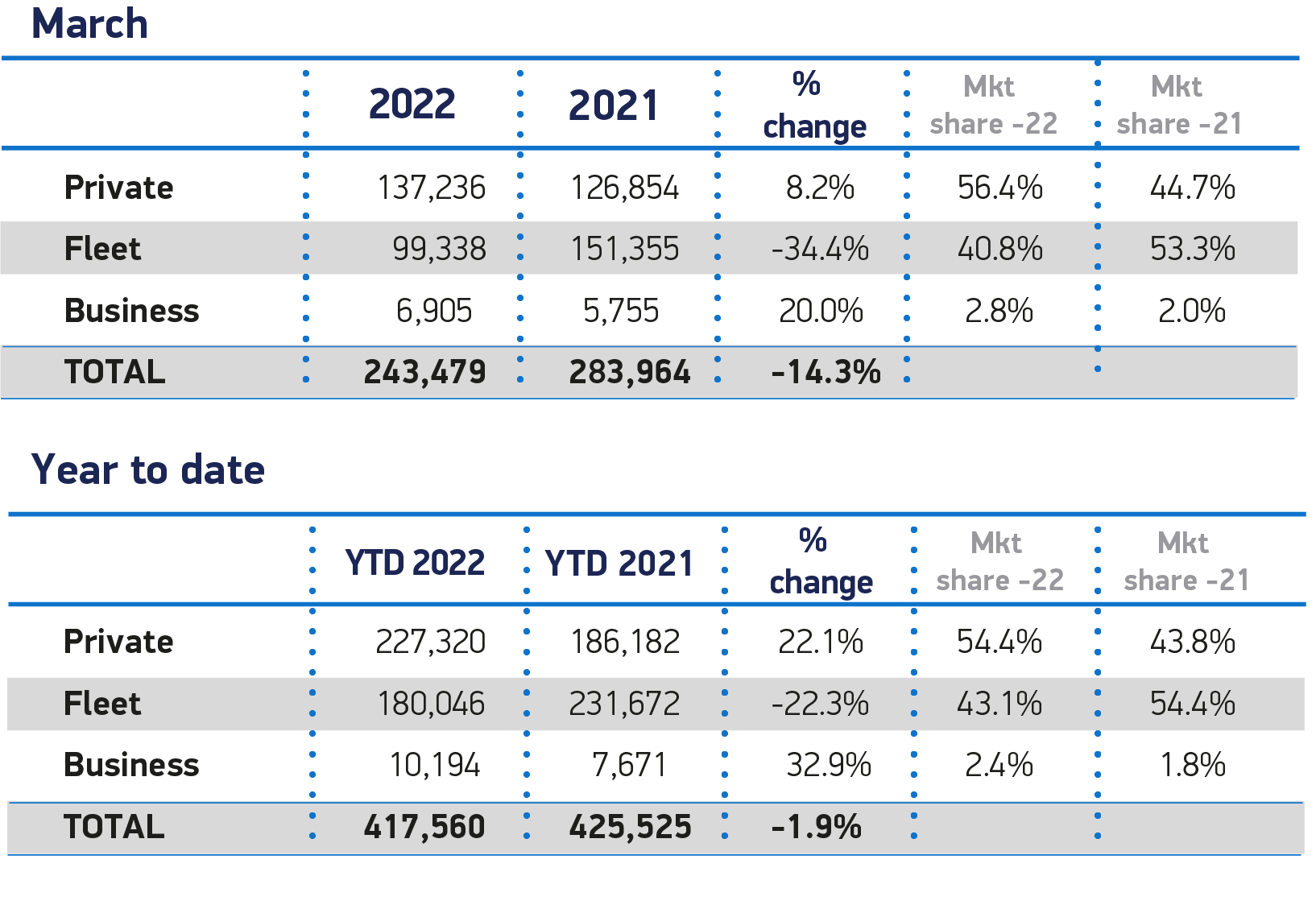 Battery electric vehicles (BEVs) continued to enjoy tremendous growth, with 39,315 new zero emission cars leaving dealerships – an increase of 78.7% on last year – and taking a 16.1% market share. This is the highest volume of BEV registrations ever recorded in a single month, and means that more were registered in March 2022 than during the entirety of 2019.2 Plug-in hybrid (PHEVs) registrations declined by -7.5% to 16,037 units, but hybrids (HEVs) grew 28.4% to 27,737 units. As a result, electrified vehicles comprised more than a third (34.1%) of all new car registrations. 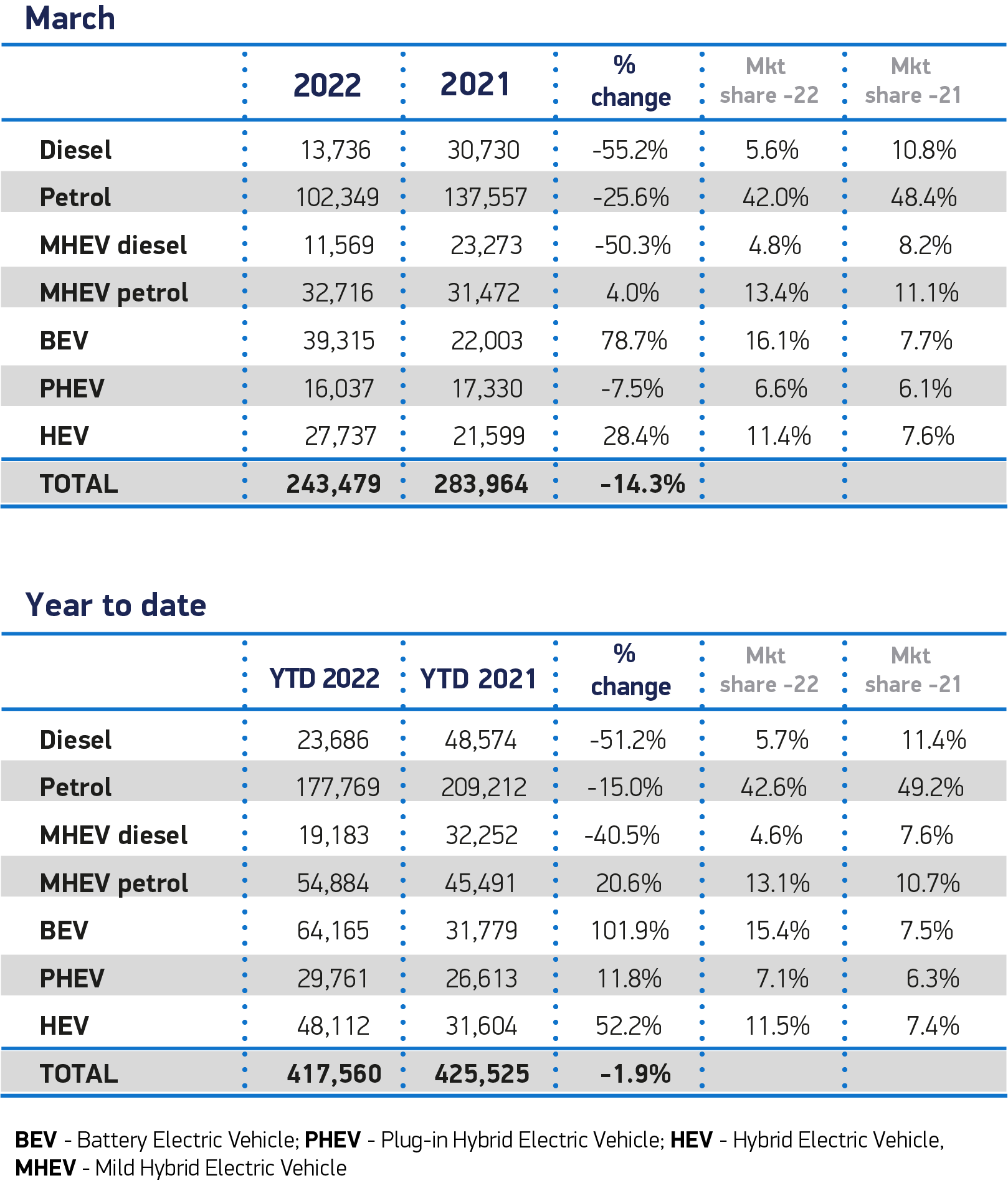 With the industry reporting strong order books, it is the constraints on supply that are preventing the sector from moving into full recovery. The shortage of semiconductors, itself an effect of the pandemic, is affecting the sector globally but longer-term uncertainty remains, with the invasion of Ukraine raising risk to supply chains. More broadly, however, economic headwinds such as rising energy costs, fuel costs, inflation and a squeeze on household incomes could impact new vehicle demand. With grants for BEVs ongoing until at least next March, however, interest rates still low and electric cars benefiting from lower running costs, there are significant benefits for drivers who can order new vehicles now.

March is typically the biggest month of the year for the new car market, so this performance is deeply disappointing and lays bare the challenges ahead. While demand remains robust, this decline illustrates the severity of the global semiconductor shortage, as manufacturers strive to deliver the latest, lowest emission vehicles to eagerly awaiting customers. Placing orders now will be beneficial for those looking to take advantage of incentives and lower running costs for electric vehicles, especially as the Ukraine crisis could affect supply still further. With increasing household and business costs, government must do all it can to support consumers so that the growth of electric vehicles can be sustained and the UK’s ambitious net zero timetable delivered.