UK car production grew for the first time since June 2021 in May, up 13.3%, with 62,284 units leaving factory gates, according to figures released today by the Society of Motor Manufacturers and Traders (SMMT). This rise, which comes despite the closure of a major car plant last year, along with key model changeover at another, must, however, be viewed in context against May 2021, which was still suffering significantly from pandemic related headwinds. Indeed, output remains -46.3% below the pre-pandemic month in 2019, with ongoing supply chain issues, increasing economic uncertainty, rising business costs and disruption caused by the war in Ukraine.1

Production for both overseas and domestic markets increased in May, by 8.9% and 39.5% respectively. Exports accounted for 82.1% of all new cars built, with almost six-in-ten of these destined for the EU. Shipments to the US decreased by -35.4%, with the closure of a major UK plant in 2021 continuing to affect export levels across the Atlantic.

In the year to date, overall output has decreased by more than a fifth (-23.2%), with supply chain constraints, most notable the shortage of semiconductors, constricting volumes, with just 330,185 units built – a shortfall of some 99,641. This has largely been driven by a -26.9% decline in exports and a further -4.5% fall in production for the domestic market.

This news comes in the same week as new analysis from SMMT revealed manufacturers are facing a £90 million increase on their energy bills, which are already 59% higher than the EU average. In its new report, From Full Throttle to Full Charge, SMMT is calling on the government for urgent action to enhance UK Automotive’s competitiveness and safeguard manufacturing as the sector transitions towards zero emission motoring.2 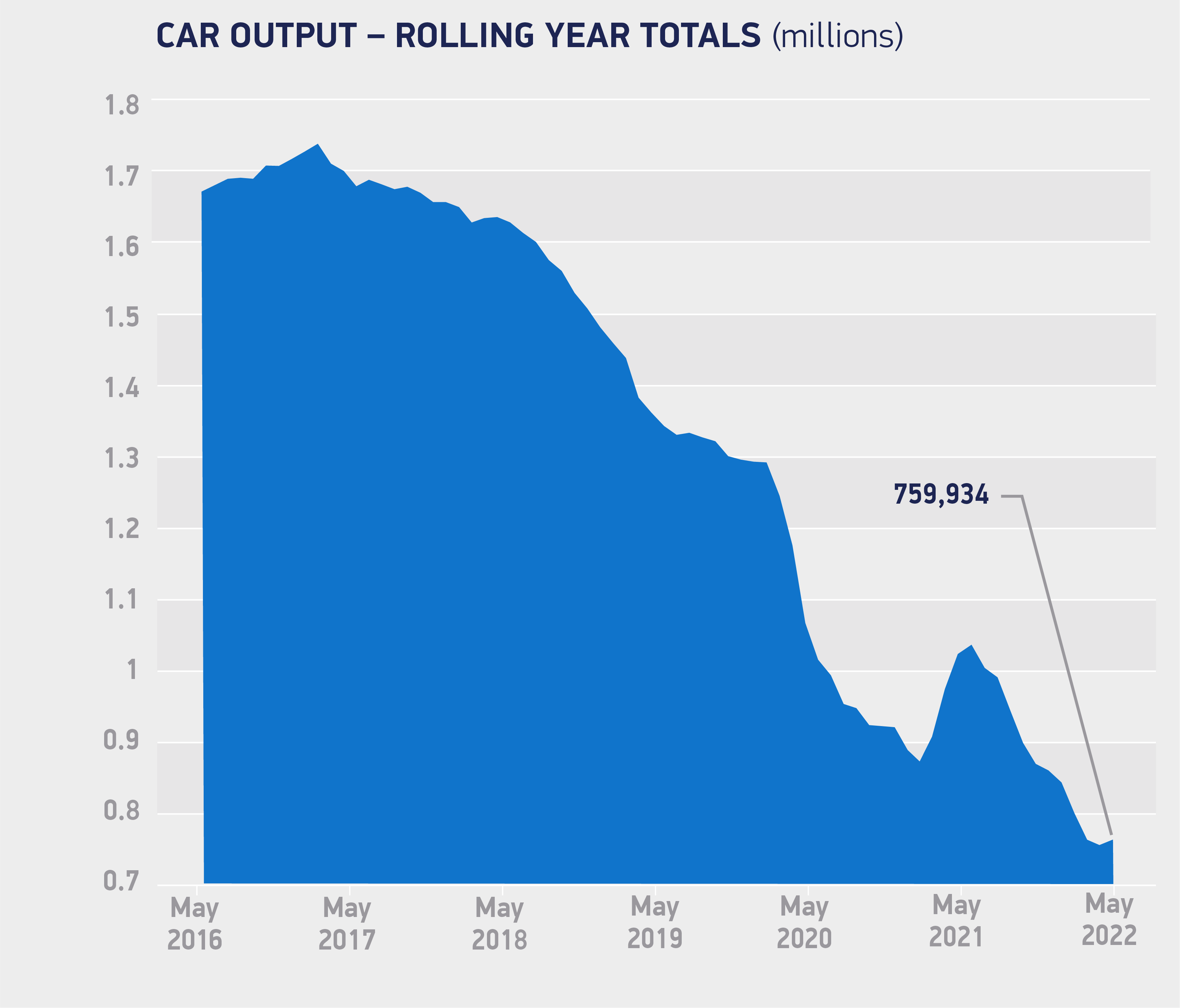 May’s return to growth for UK car output is hugely welcome after 10 months of decline, indicating the sector’s fundamental resilience. Any recovery, however, will be gradual as supply chain deliveries remain erratic, business costs volatile and geopolitical instability still very real. With the industry racing to decarbonise, we need to safeguard manufacturing competitiveness, drive investment and develop the skill base. Government and industry have a role to play in this transformation and collaboration will be essential if the UK is to remain at the forefront of automotive innovation.