Over the past 20 years, the UK automotive sector has become one of the most efficient in Europe, if not globally. Manufacturers’ strict internal efficiency targets and competition between plants for new model production contracts have driven resource efficiency to new heights. Manufacturing processes are continuously refined to provide optimum performance, getting close to the limits of current technology. Nowadays, production volumes and weather conditions, which affect space-heating requirements, influence year-on-year performance. This means any significant efficiency improvements are more likely to come as a result of a technological step change, for example the exclusive use of decarbonised electricity, biomass or hydrogen, which will require external support from service providers, suppliers and government. The shiſt to alternatively fuelled vehicles is likely to see a shiſt in the carbon footprint of the industry, notably with greater emphasis on the production phase.

Since 1999, automotive manufacturers have invested heavily in reducing energy use at production sites and offices, and
as a result, have reduced average energy consumption per vehicle produced by 43.3%.

Over the past 20 years, the industry has achieved a 53.6% reduction in relative CO2. Thanks to the ongoing decarbonisation
of the National Grid, official electricity conversion factors are revised annually to reflect the increasing share of renewable
sources. In 2018, green energy made up 46.5% of all electricity used. The renewable content of such energy depends on
individual contracts. Some manufacturers require their energy supplier to provide them with Renewable Energy Guarantees of
Origin (REGO) certificates, which guarantees that their energy purchased comes from renewable sources.

Since 2000, long-term investments in water-efficient technologies and gradual adjustment of procedures have made it possible to reduce water use per vehicle by 47.7% and absolute volumes by 27%. 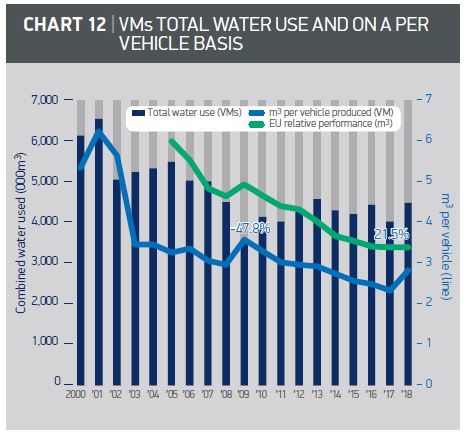 Between 1999 and 2018, the industry achieved a 95% reduction in landfill waste per vehicle produced. This was delivered by a holistic approach to the vehicle life cycle and successful application of the waste hierarchy approach – prevent, reduce, reuse, recycle and recover- in production processes. The introduction of the landfill tax in 1996 also contributed to this achievement. 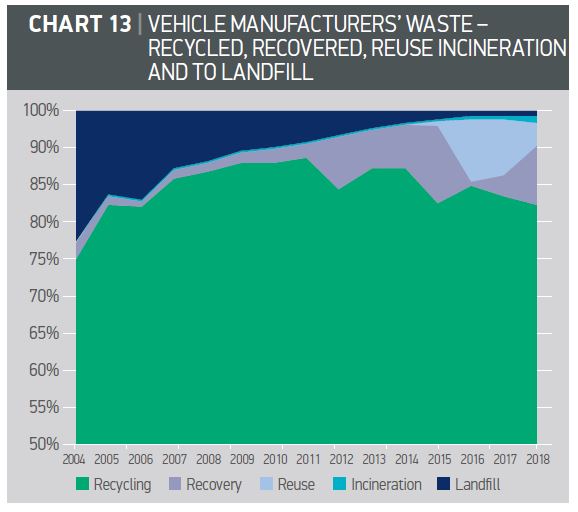 During the past two decades, vehicle manufacturers have invested heavily in new painting equipment, while continuing
to refine their own processes to improve performance.  In 2018, VOCs reached 33.5g/m2 from cars and 41.8g/ m2 from vans, a year-on year decline of 15.9% and 3.1% respectively. Since 1999, VOCs from painting dropped by 28.6% for cars and 41.2% for vans. 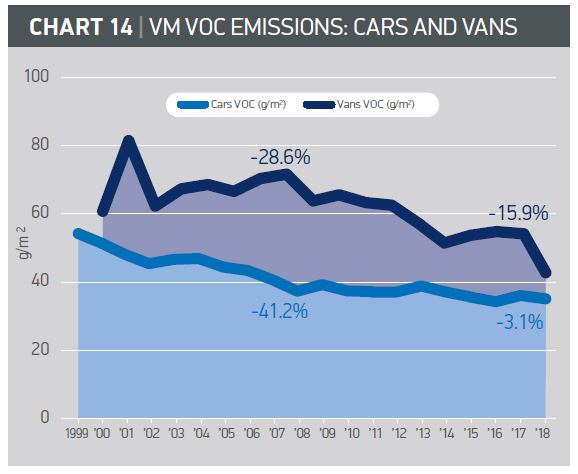