No time to waste on Brexit

A rude awakening to 2019. Any remaining festive cheer has been quickly extinguished by a raft of negative news for the industry. Brexit uncertainty, job cuts and car registration figures showing a -6.8% drop overall in 2018 make for a deeply worrying start to the year.

A second consecutive year of substantial decline was the immediate major concern, as falling consumer and business confidence, confusing fiscal and policy messages and supply constraints due to regulatory changes combined to create a turbulent market.

The substantial drop in diesel registrations was a particular concern. While petrol registrations grew, they could not compensate fully for the drop, which combined with a slowing pace in the uptake of alternatively fuelled vehicles (exacerbated by the reduction in the Plug-in Car Grant) has contributed to an annual rise in fleet average CO2 emissions of just under 3%.

These figures are now going the wrong way despite every new model being cleaner and more efficient than the one preceding it. This should act as a wake-up call for policy makers – we need a supportive fiscal and policy framework, or else the industry’s and government’s environmental targets will not be met.

That said, there were some bright spots amid the gloom; 2018’s new van figures showed a market holding steady with a moderate decline of -1.3% and that was still enough to post the fourth best year on record and beat expectations.

The UK is still the second biggest new car market in the EU, behind Germany. It is also one of the most diverse, with buyers able to choose from 350 different models to suit all driving needs. With 80 new models making their way to showrooms this year – 31 of them plug-in electric – as well as ever more advanced powertrains and connected and autonomous technology, the industry is giving consumers every reason to buy a new car. It is good for the environment, for the industry, for the Exchequer and especially for jobs, so government policy should follow suit. 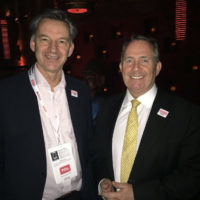 e downturn in the UK market, the industry has to export to grow. Global markets are uncertain but there is always demand for quality and innovation. SMMT has this week led industry delegations to Pune in India, Beijing for the EV100 conference and, continuing the innovation theme, to Las Vegas and the Consumer Electronics Show.

SMMT works with the Department for International Trade to draw attention to the impressive work going on in UK automotive especially around new technologies. Connected and autonomous vehicles are going to be worth an 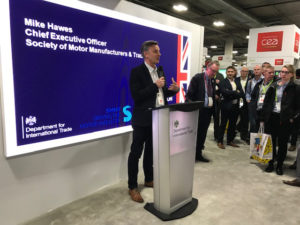 annual £51bn to the UK economy by 2030, so we need to make sure we can grasp this opportunity and ensure the UK and our industry is well positioned to lead the transition to the next-generation of automotive technology.

First, and most importantly, however, we need certainty on our future relationship with Europe. ‘No Deal’ would be a hammer blow for the industry, which is facing the toughest of global conditions. ‘No Deal’ must therefore be taken off the table. With fewer than 78 days to go before our departure from the EU, government and parliament need to come together to avoid the immediate and catastrophic consequences of a disorderly exit.