The UK new car market declined by -6.8% in 2018, with annual registrations falling for a second year to 2,367,147 units, according to figures released today by the Society of Motor Manufacturers and Traders (SMMT). A -5.5% decline in December capped a turbulent year of model changes, regulatory upheaval and continued anti-diesel policies, adding to the ongoing decline in consumer and business confidence.1

Private, fleet and business registrations all fell in 2018, with the biggest losses felt in the fleet sector (down -7.3%), while private motorists and smaller business operators registered -6.4% and -5.6% fewer new cars respectively.

Demand also fell across all vehicle segments bar the dual purpose category, which grew by +9.1% to take a fifth of the market (21.2%). Despite registrations of superminis and lower medium cars falling by -2.5% and -9.4% respectively, these smaller vehicles remain the most popular – with a combined 58.7% market share.

The biggest volume decline was seen in the diesel sector, down -29.6% in 2018, with the volume loss equivalent to some 180% of the overall market’s decline. Anti-diesel rhetoric and negative fiscal measures took their toll, with December marking the 21st consecutive month of decline for the fuel type – despite new emissions tests showing diesels deliver in the real world. Growth in registrations of petrol (+8.7%) and alternatively fuelled vehicles (+20.9%) replaced some of the loss but not enough to offset the full shortfall as many diesel owners adopt a ‘wait and see’ approach, keeping hold of their older, more polluting vehicles for longer. 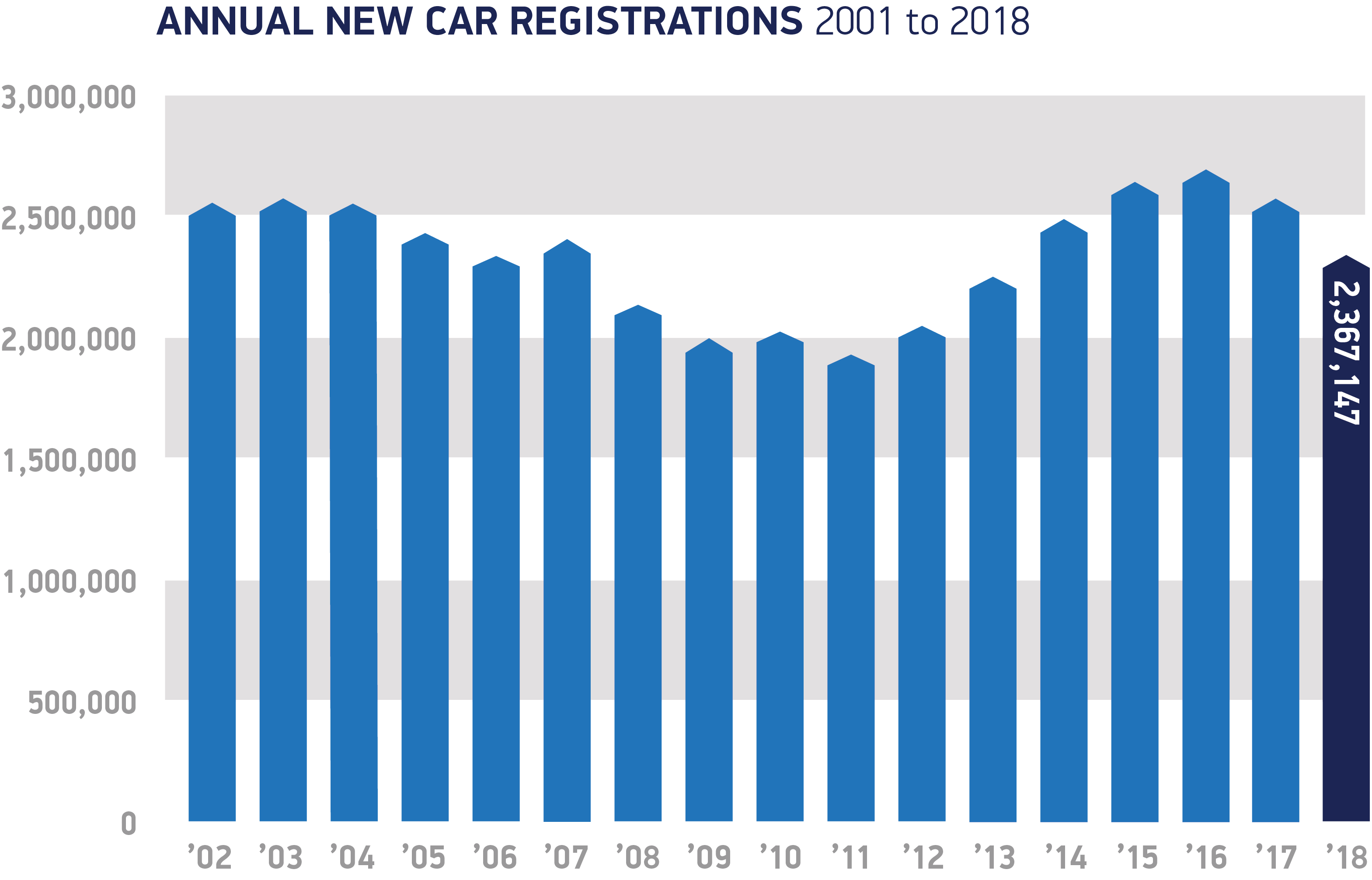 In the AFV sector, petrol electric hybrids remained the most popular choice, up +21.3% to 81,156 units. Plug-in hybrids (PHEVs) also recorded a strong uplift (+24.9%) over the year, though the figures suggest growth is slowing following the removal of the Government’s plug-in car grant for these vehicles in October.

Demand for PHEVs grew almost 30% in the first 10 months, but year on year increases fell to 3.1% and 8.7% in November and December respectively. Pure electric cars, meanwhile, grew 13.8% in the year but, with just 15,474 registered, they still make up only 0.7% of the market. Given the reduction in government incentives, the pace of growth of plug-in cars is now falling significantly behind the EU average.2

The figures come as SMMT publishes data showing the UK new car fleet average CO2 rose for a second successive year, by 2.9% to 124.5g/km. This is despite huge investment by manufacturers to deliver ever more efficient cars, with the average new or updated model emitting -8.3% less CO2 than that it replaced. While part of this fleet average CO2 increase was due to segment shift and the introduction of the new, more onerous WLTP test which produces higher figures, the move away from diesels is having a significant impact.

Diesels are, on average, 15-20% more efficient than petrol equivalents and so have a substantial role to play in addressing climate change. The hard won gains made by the sector since CO2 records began in 1997 (when the new car fleet average was 189.8g/km) are being undermined by the shift away from diesel and disappointing growth in alternatively fuelled vehicles. This only underscores the challenge both industry and government face in meeting ambitious climate change targets.

A second year of substantial decline is a major concern, as falling consumer confidence, confusing fiscal and policy messages and shortages due to regulatory changes have combined to create a highly turbulent market. The industry is facing ever-tougher environmental targets against a backdrop of political and economic uncertainty that is weakening demand so these figures should act as a wake-up call for policy makers.

Supportive, not punitive measures are needed to grow sales, because replacing older cars with new technologies, whether diesel, petrol, hybrid or plug-in, is good for the environment, the consumer, the industry and the exchequer.

Despite the overall decline in 2018, demand for new cars in the UK remains solid, with volumes on a par with the preceding 15-year average,3 and the market still the second biggest in the EU, behind Germany. It is also one of the most diverse, with buyers able to choose from some 350 different models available in fuel types and body styles to suit all driving needs.

Meanwhile, more than 80 exciting new generation models – 31 of them plug-in electrics – are set to make their showroom debuts in 2019, and with some compelling deals on offer, the industry is continuing to invest to grow the market despite the headwinds.