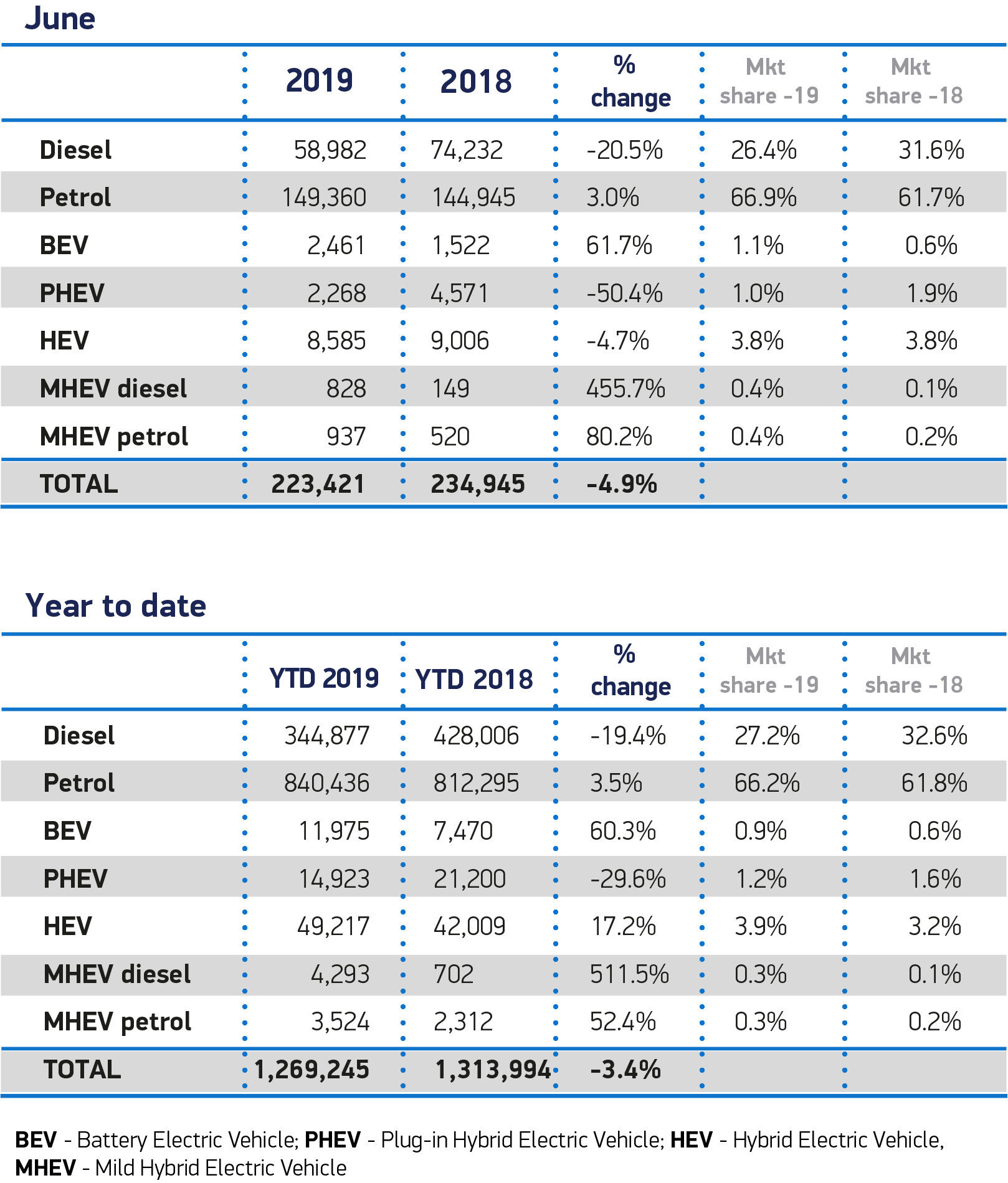 UK new car registrations declined for a fourth consecutive month in June, with year-on-year demand falling by -4.9% to 223,421 units, according to the latest figures released today by the Society of Motor Manufacturers and Traders (SMMT). 1,269,245 new cars joined British roads in the first half of the year, down -3.4% as ongoing confusion over low emission zones and diesel, the removal of key ultra low emission vehicle incentives and an overall decline in buyer confidence affected the market.

Demand fell in all sectors, with private registrations seeing a decline of -4.8%, while larger fleet and business registrations also fell, down -2.5% and -37.1% respectively. Declines were also seen across every vehicle segment, except Dual Purpose which grew 9.1% in June and 7.3% year-to-date to take 22.6% of the market. However, Supermini remains the UK’s best-selling segment, making up 31.0% of all registrations in the first six months. 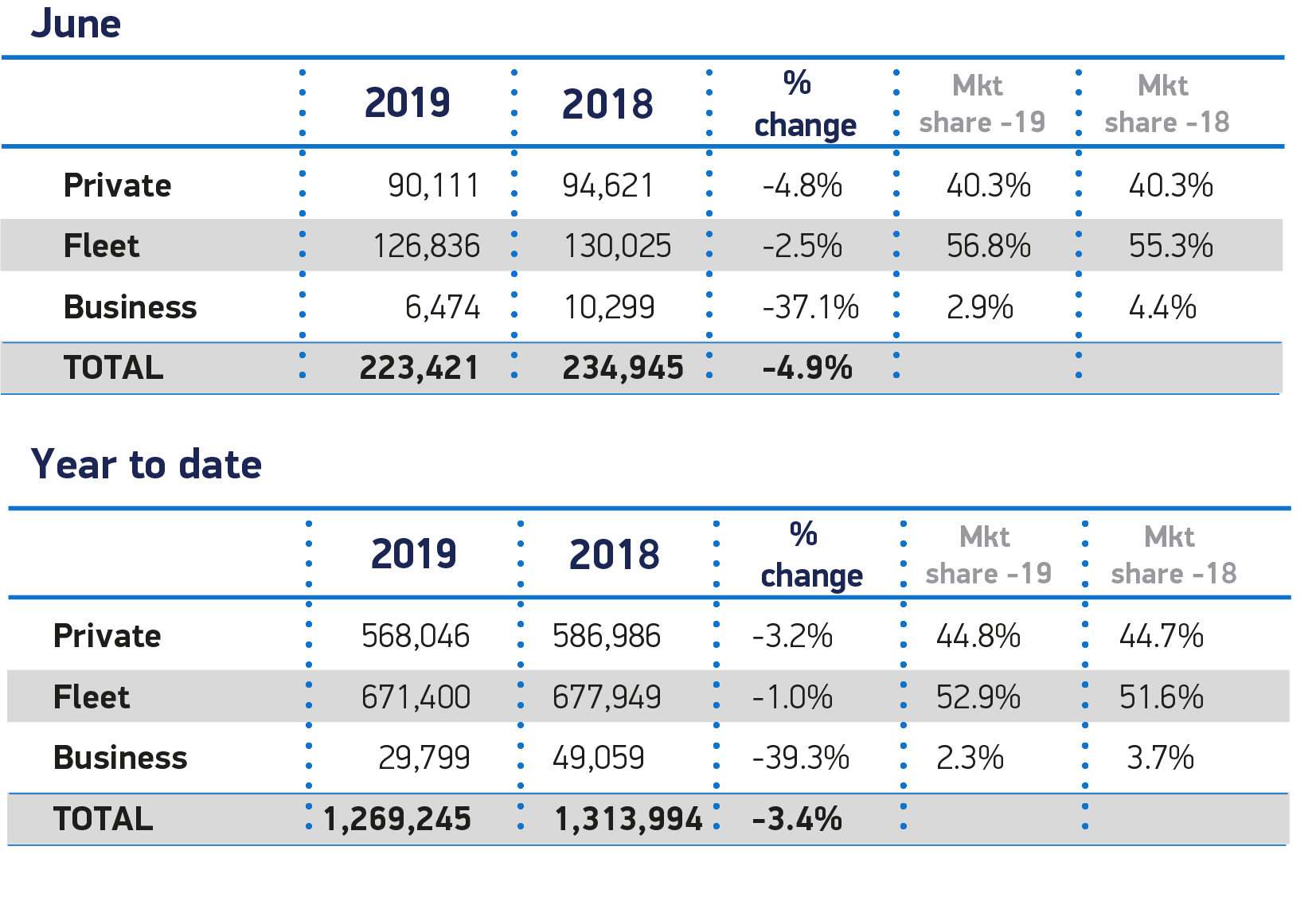 The month saw growth for petrol and battery electric registrations, up 3.0% and 61.7% respectively, but this was not enough to offset the continuing decline of diesel, which fell for the 27th month in a row (-20.5%). Significantly, plug-in hybrids continued the recent downward trend, falling by a massive -50.4%, while hybrids also fell, by -4.7%.

The performance tipped the overall alternatively fuelled vehicle (AFV) sector into negative growth for the first time since April 2017, undermining efforts to reduce emissions through fleet renewal of the latest ultra low emission vehicles. AFV registrations (BEV, PHEV, HEV) declined 11.8% to 13,314 units in June. This is despite ongoing investment, which has enabled manufacturers to offer British car buyers more choice than ever before with more than 350 models now available in the UK – 44 of them plug-ins. 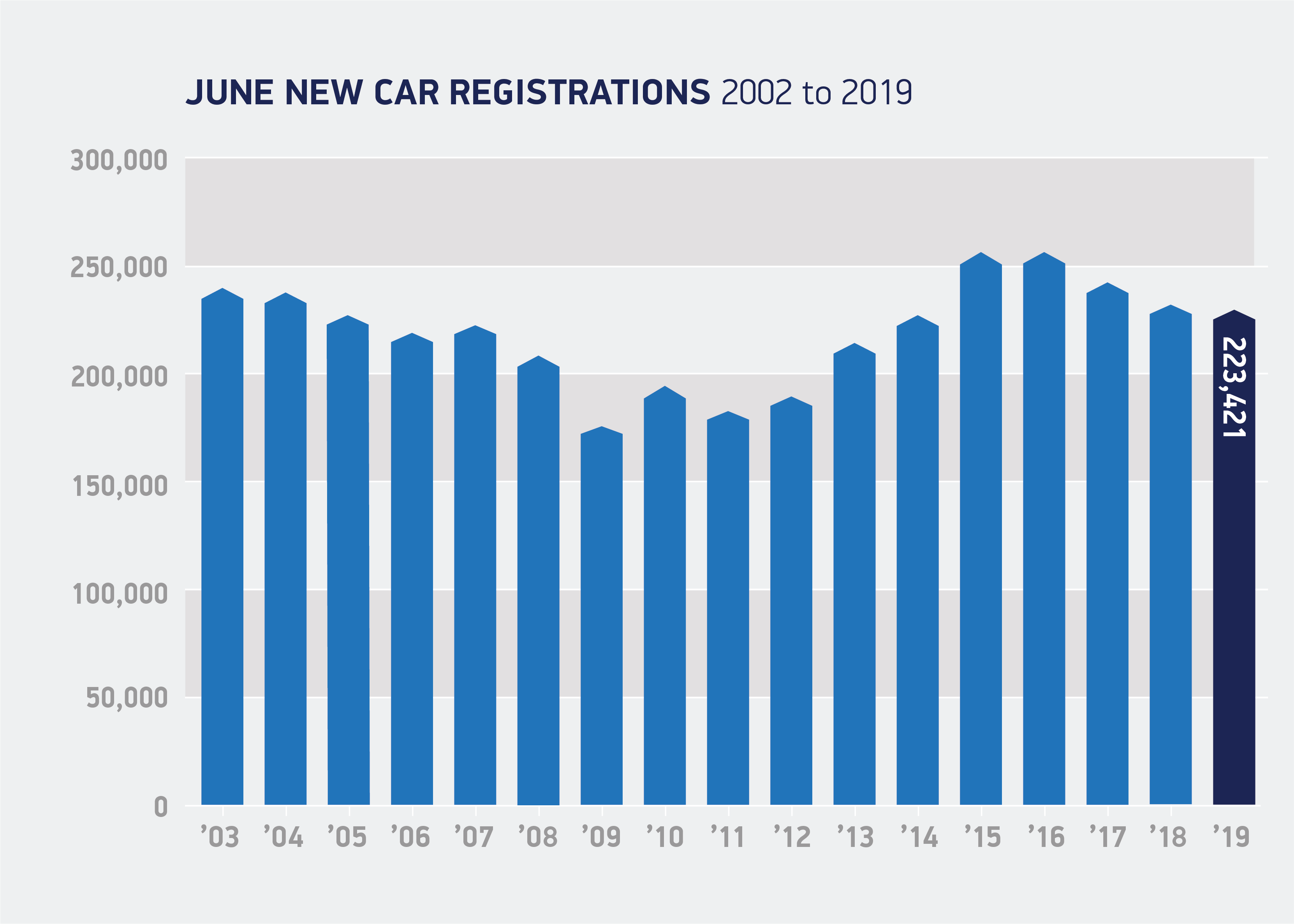 This technological innovation has led to a growing range of powertrain options, including advanced low emission petrols and diesels, and an ever-greater number of hybrid, plug-in hybrid, battery electric and hydrogen cars. Another option increasingly available is mild-hybrid technology, which provides an energy boost to traditional internal combustion engines, helping to improve fuel efficiency and lower CO2. To highlight these advances, SMMT’s monthly registrations data now includes a breakdown of the different technologies now being registered.1

Another month of decline is worrying but the fact that sales of alternatively fuelled cars are going into reverse is a grave concern. Manufacturers have invested billions to bring these vehicles to market but their efforts are now being undermined by confusing policies and the premature removal of purchase incentives.

If we are to see widespread uptake of these vehicles, which are an essential part of a smooth transition to zero emission transport, we need world-class, long-term incentives and substantial investment in infrastructure.

Fleet renewal remains the quickest way to address environmental concerns today and consumers should have the confidence – and support – to choose the new car that best meets their driving needs, whatever the technology, secure in the knowledge that it is safer and cleaner than ever before.