UK car manufacturing rose 3.3% last month, with 92,158 units produced, according to figures released today by the Society of Motor Manufacturers and Traders (SMMT). This was the first increase in 15 months due mainly to the fact that several key plants that had brought forward planned summer shutdowns to April to guard against the disruption of the then March 29 withdrawal date kept production lines rolling throughout August.1 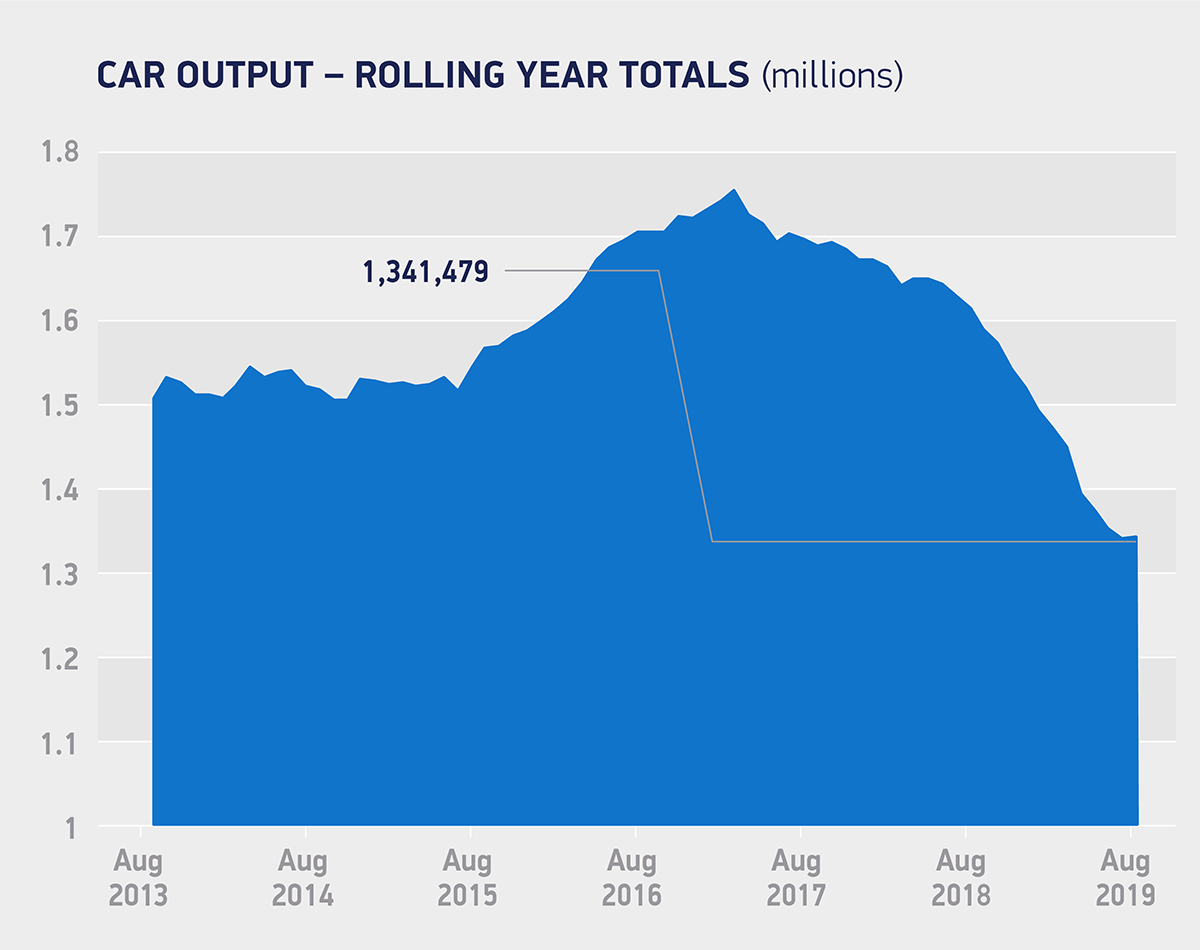 In August, production for the domestic market was up 15.2% following a significant fall in the same month in 2018 when several factors, notably preparation for new EU-wide testing regulations, affected volumes. Exports, meanwhile, registered marginal 0.6% growth. This disguises ongoing weakness in major global markets with production for China down two fifths (-43.8%), exports to the US falling -9.1% and those to the EU -13.7% in the first eight months. However, exports still account for eight out of every 10 cars built in Britain – with the EU taking more than half (55.4%).

The news comes in the same week that industry representatives from 17 of the EU’s biggest car producing and buying countries, including Germany, Italy, France, Belgium and Spain, as well as Turkey, with which the UK enjoys beneficial trading terms thanks to the EU, joined forces in united opposition to a ‘no deal’ Brexit.3 The repercussions of a hard Brexit, the bloc warned, would be severe, with tariffs4 threatening consumer choice and affordability on both sides of the Channel and the end of barrier-free trade bringing disruption to the industry’s efficient just-in-time operating model. In the UK alone, just one minute of production stoppage caused by border delays would amount to £50,000 of lost value add – or £70 million a day.5

Softening of global demand is compounding the challenge to UK manufacturers for whom a ‘no deal’ Brexit would be a hammer blow. The mere threat of no deal has undermined investment and the potential imposition of tariffs, border delays and additional administrative burdens would damage competitiveness.

We now need parliament and government to redouble efforts to get a deal that maintains free and frictionless trade. Given the ongoing challenges and costs being incurred, there is not a moment to lose.

5. Delays to the arrival of components would cost gross value of £70 million a day based on five-day working week. This equals £50,000 a minute. Source: www.smmt.co.uk/wp-content/uploads/sites/2/2019-UK-AUTOMOTIVE-TRADE-REPORT.pdf