Family-run bus and coach operator Lloyds Coaches has added a further two Enviro200 single decks from Alexander Dennis Limited (ADL) to its fleet of over 60 vehicles. 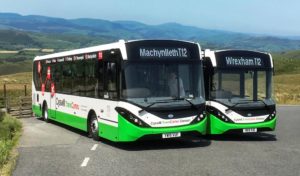 Both buses have gone straight into service on the high profile T12 route that operates between Machynlleth, in mid-Wales, where the company is based, to Newtown, Welshpool, Oswestry and Wrexham.

The latest Enviro200s join a series of 80-seat Enviro400 double decks which Lloyds Coaches run on their prestigious X28 Coastliner route. Together, both the Enviro200 single and Enviro400 double deck buses are a demonstration of the company’s commitment to the introduction of low emission, easy access buses.