UK car production declined -44.6% in August, according to figures released today by the Society of Motor Manufacturers and Traders (SMMT). Just 51,039 units rolled off factory lines as efforts to ramp up production stalled amid the coronavirus crisis, with weak demand in key overseas markets compounded by a significant fall in output for UK buyers. The performance also reflects an unusually strong August in 2019, when some plants worked through the customary summer maintenance shutdown period, instead pausing in April to mitigate the then possible ‘no deal’ Brexit on 31 March.

Production for UK buyers fell -58.3% in the month to just 7,795 units, while exports followed a similar pattern, declining by -41.1% with 43,244 vehicles produced for overseas markets. Almost 85% of all cars built in Britain in August were destined for countries around the world, underlining the importance of this trade to the sector and UK economy.

So far this year UK car production is down -40.2%, representing a loss of 348,821 units. Manufacturing output for the domestic market is down -46.0% in the first eight months, with exports falling -38.8%, but still taking the lion’s share of output.

The news comes as the UK braces for a second wave of coronavirus, with local lockdowns in place across parts of the country and tighter social and business restrictions to curb the rate of transmission. Consequently, assistance for sectors such as automotive, where many firms cannot operate at full speed, is now critical and the Job Support Scheme, as well as the other financial measures announced yesterday, come as welcome news. Flexible measures to support short time working and cashflow are essential for automotive businesses while market demand and production capacity remain diminished. 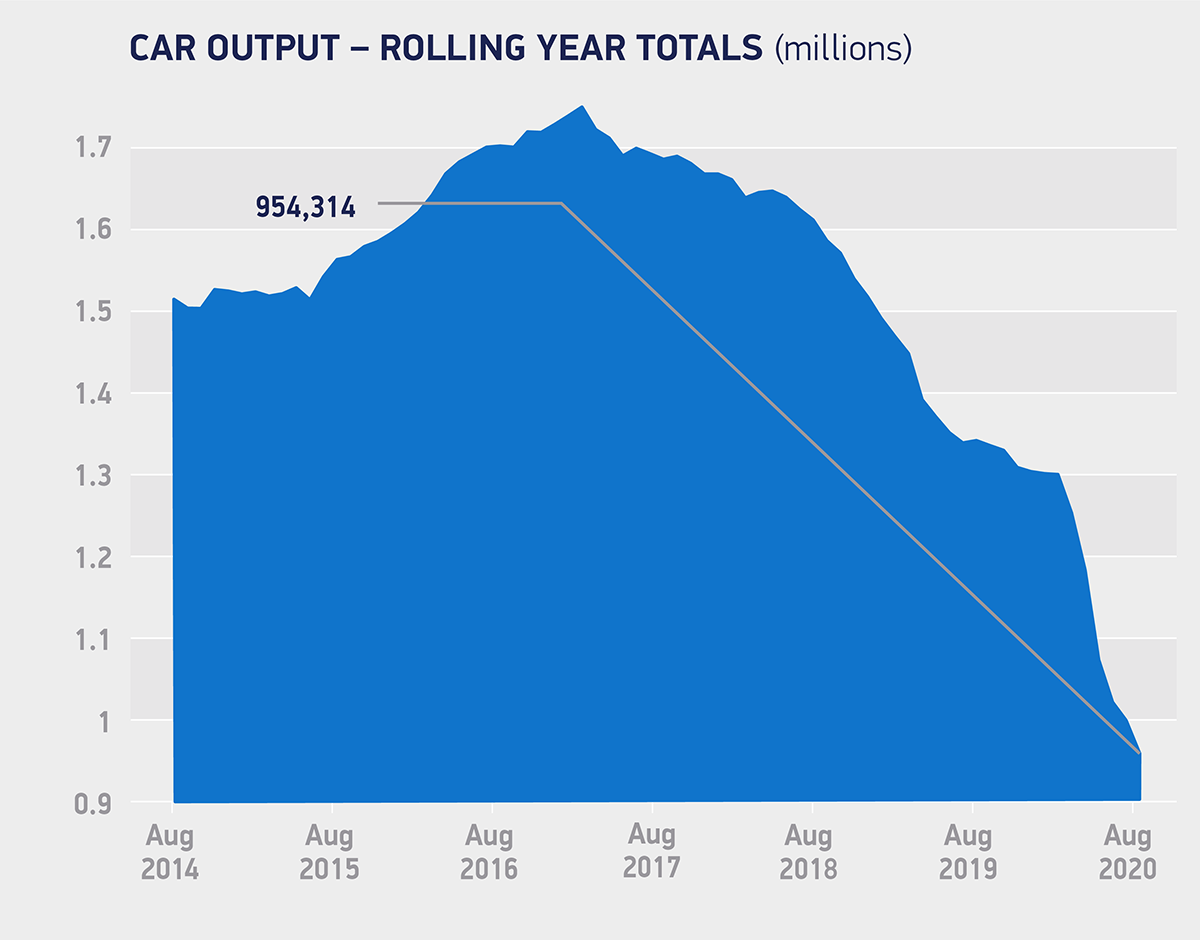 So far this year UK car production losses due to the crisis have cost manufacturers more than £9.5 billion, losses that will be impossible to catch back.1 Meanwhile at least 13,500 jobs are known to have been cut across the entire UK automotive sector in 2020, with a recent SMMT member survey highlighting that one in six auto jobs are at risk of redundancy when the current job support scheme ends.2

These are increasingly disturbing times for UK car makers and suppliers with the coronavirus crisis weighing heavily on the sector. Companies are bracing for a second wave with tighter social and business restrictions making the industry’s attempts to restart even more challenging. The UK industry is fundamentally strong and agile, and the measures announced yesterday by the Chancellor are welcome and essential, although we await more details of how they will work for all businesses and crucially large manufacturers.

Companies need to retain skilled jobs and maintain cashflow and we may need more support to boost business and consumer confidence later this year. Moreover, with fewer than 100 days until the Brexit transition period ends, we need urgent agreement of an ambitious free trade deal with our largest market to avoid the second shock of crippling tariffs.

The crisis of a second wave of coronavirus comes with the prospect of a ‘no-deal’ Brexit now mere months away and with the UK on course to produce just below 885,000 cars this year, down 34% on 2019. The potential for this performance to rebound exists, but needs an ambitious, tariff-free FTA which could help car output return to pre-crisis levels of 1.2 million units by 2025.3

However, a ‘no deal’ scenario would be disastrous, with car volumes potentially falling below 750,000 by 2025, hampering sector efforts to drive investment into the new skills, facilities and technologies that will be integral to delivering a zero-carbon future for the UK.3 Furthermore, calculations released last week revealed that ‘no deal’ would cost the pan-European automotive industry some £100 billion in lost trade over the next five years, putting jobs at risk in a sector that supports 14.6 million livelihoods, representing one in 15 of EU and UK jobs.4