The UK new car market declined for a sixth consecutive month in September, with 426,170 new units registered, according to figures released today by the Society of Motor Manufacturers and Traders (SMMT). Registrations fell by -9.3% in this key month, as economic and political uncertainty, and confusion over air quality plans led to a fall in consumer confidence.

Demand from business, fleet and private buyers all fell in September, down -5.2%, -10.1% and -8.8% respectively. Meanwhile, registrations fell across all body types except dual-purpose, which grew 2.4%. The biggest declines were seen at opposite ends of the market with both luxury saloons and superminis falling -36.4% and 21.2% respectively.

Demand for alternatively fuelled vehicles (AFVs) continued to accelerate in September however, surging 41.0% in the month and 34.6% year-to-date, with nearly 95,000 leaving forecourts this year. However, this couldn’t compensate for declines in registrations of petrol cars, down -1.2%, and, especially, diesel which fell for the sixth consecutive month, down -21.7%. 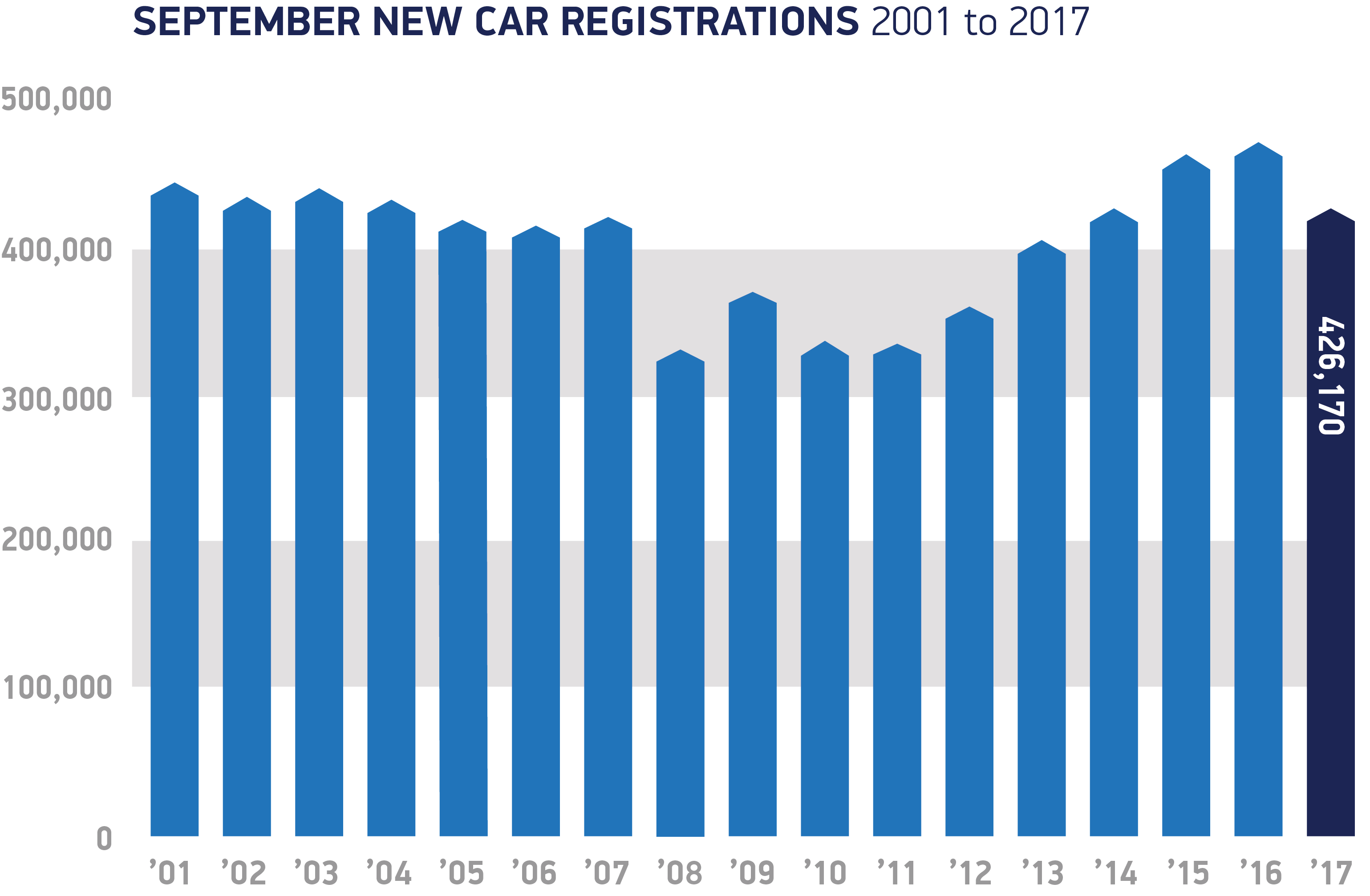 Confusion surrounding air quality plans has inevitably led to a drop in consumer and business demand for diesel vehicles, which is undermining the roll out of the latest low emissions models and thwarting the ambitions of both industry and government to meet challenging CO2 targets. Indeed, if new diesel registrations continue on this negative trend, UK average new car CO2 levels could actually rise this year, the first time such an increase would have occurred since average CO2 emissions were recorded.2 So far this year 485,067 diesel vehicles have been produced in the UK, and maintaining strong demand for the latest new diesel vehicles is essential for the health of the UK automotive sector that employs over 814,000 people.

Year-to-date, new car registrations have fallen -3.9%. But, overall, the market remains at a historically high levels with over 2 million vehicles hitting UK roads so far this year.

September is always a barometer of the health of the UK new car market so this decline will cause considerable concern. Business and political uncertainty is reducing buyer confidence, with consumers and businesses more likely to delay big ticket purchases. The confusion surrounding air quality plans has not helped, but consumers should be reassured that all the new diesel and petrol models on the market will not face any bans or additional charges. Manufacturers’ scrappage schemes are proving popular and such schemes are to be encouraged given fleet renewal is the best way to address environmental issues in our towns and cities.