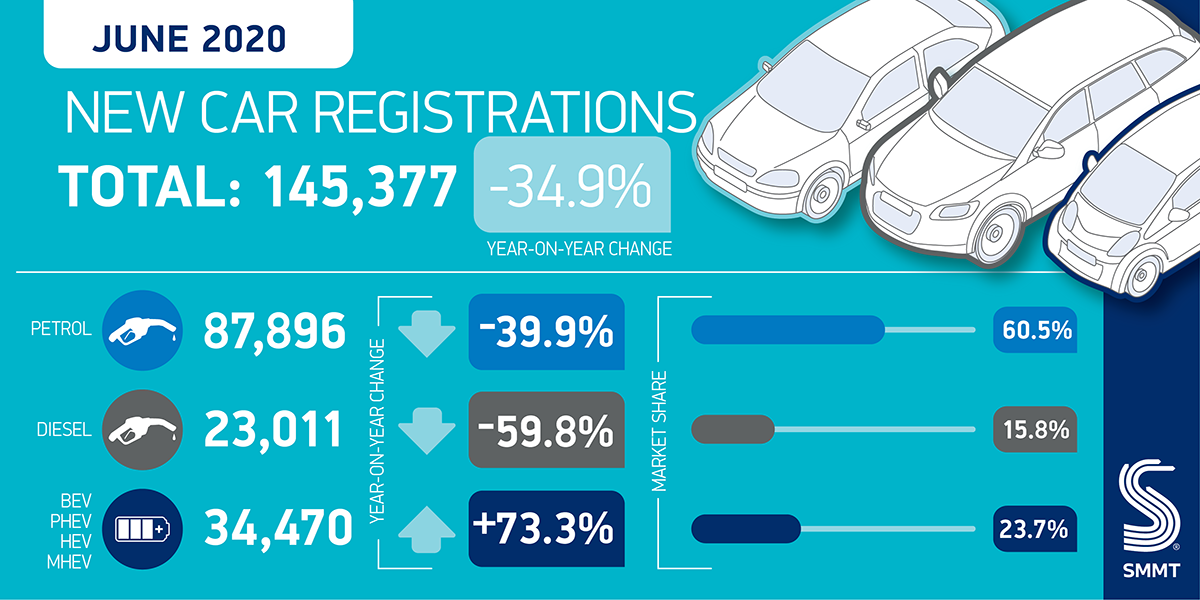 UK new car registrations fell -34.9% in June, according to figures published today by the Society of Motor Manufacturers and Traders (SMMT) as the market began a tentative restart after more than two months of lockdown. The drop was an improvement on May’s -89.0% wipe-out but, with 145,377 new cars registrations, this still represented a significant decline of 78,044 compared with June 2019, as dealerships in Wales and Scotland remained closed for much of the month.2 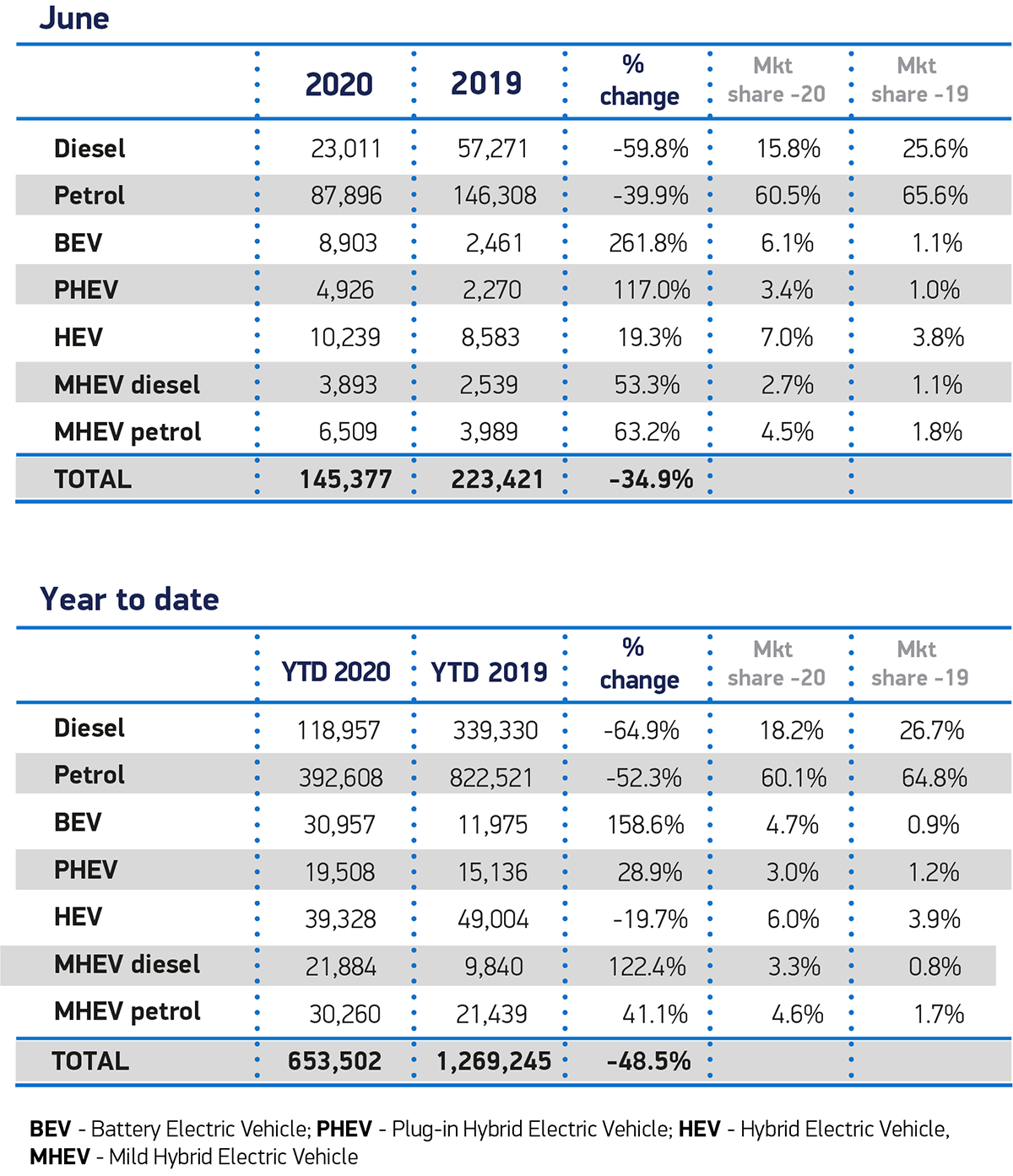 The lacklustre performance means that the market is almost 616,000 units, or -48.5%, behind the same period last year, with some 240,000 private sales lost since consumers were told to ‘stay at home’ and retailers forced to close, resulting in an estimated £1.1 billion loss to the Treasury in VAT receipts alone.3

Private demand proved more resilient than business, down -19.2% in June with orders made pre-lockdown resulting in 72,827 registrations and accounting for more than half of the market. Fleet sales fell by a very substantial -45.2% to 69,498 units as businesses paused purchasing amid expenditure reviews. 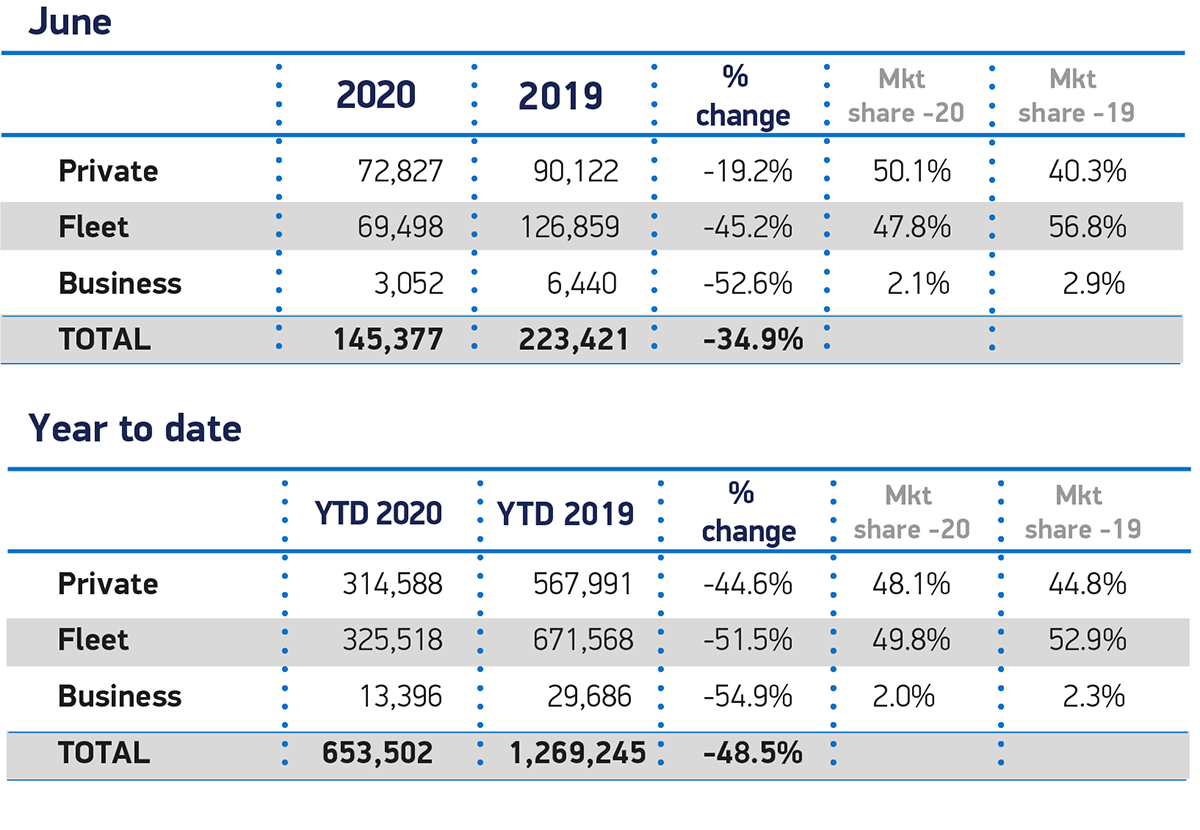 With one in five showrooms in England remaining shut throughout June,4 and those in Wales and Scotland unable to open until the end of the month, there remains some uncertainty regarding the true level of demand. The hoped for release of pent-up sales has not yet occurred, with consumer confidence for big ticket purchases looking weak meaning that automotive is likely to lag behind other retail sectors. 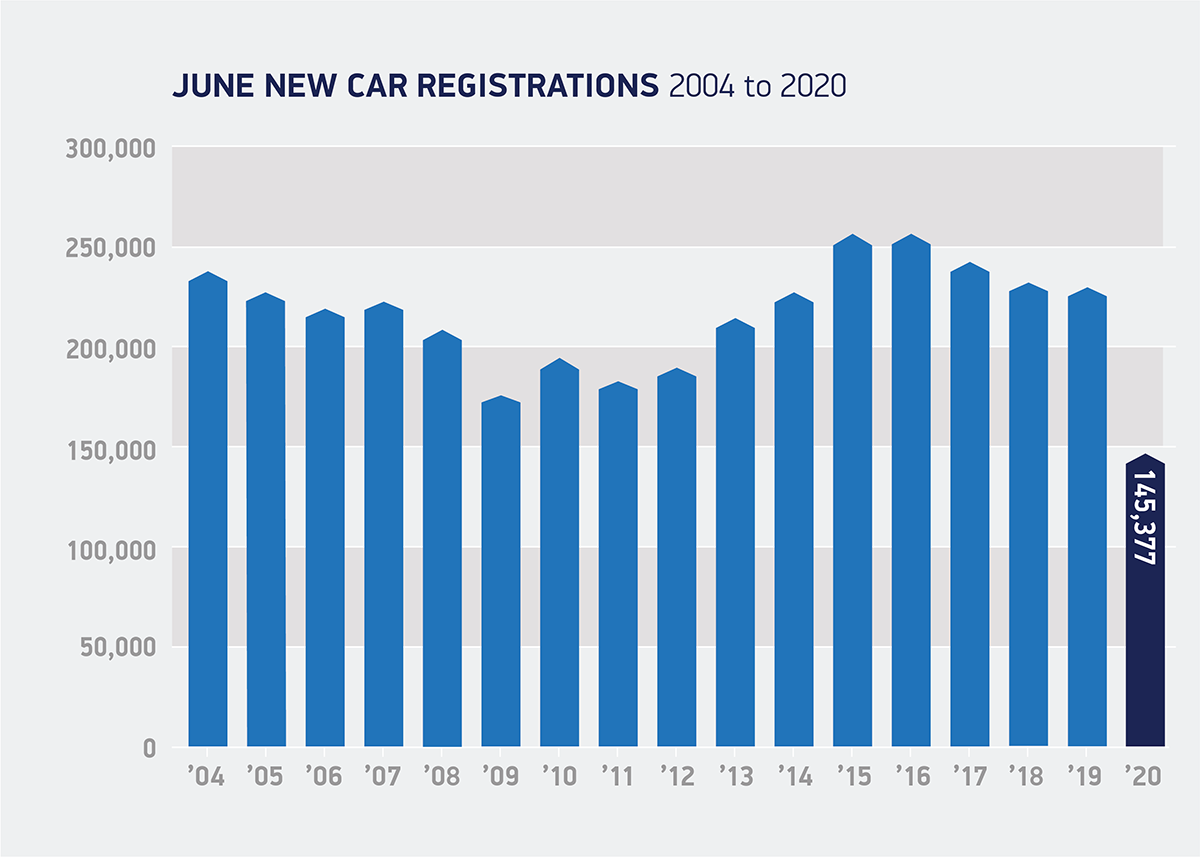 As the wider retail and hospitality sectors re-open and society and the economy begin a gradual return to normality, the true picture of consumer confidence is likely to emerge. However, concerns remain with the government’s Coronavirus Jobs Retention Scheme winding down and major employers across all sectors announcing significant job losses. The subsequent effect on livelihoods as well as on business and consumer confidence will not help a depressed market.

While it’s welcome to see demand rise above the rock-bottom levels we saw during lockdown, this is not a recovery and barely a restart. Many of June’s registrations could be attributed to customers finally being able to collect their pre-pandemic orders, and appetite for significant spending remains questionable.

The government must boost the economy, help customers feel safer in their jobs and in their spending and give businesses the confidence to invest in their fleets. Otherwise it runs the risk of losing billions more in revenue from this critical sector at a time when the public purse needs it more than ever.

The automotive retail sector employs more than 590,000 people and, with a £200 billion turnover, is one of the UK’s most valuable economic assets. The annual tax-take from VAT, VED and other duties on new car sales to private buyers alone amounts to some £5.4 billion, while the sector also helps drive the UK’s £82 billion automotive manufacturing industry, supporting a further 168,000 high-skilled and high-paid jobs in communities across every nation and region of the UK, and delivering billions to the economy every year.

1 623,483 new cars registered H1 1971, the last time first half volumes were lower than 2020
2 Showrooms in England were allowed to re-open on 1 June, in Wales on 22 June, and in Scotland on 29 June
3 Calculation based on VAT on new cars registered to private buyers in the UK using average vehicle price, applied to year-on-year market losses during lockdown and restart period 24 March-30 June (c240K units)
4 Source: National Franchised Dealers Association