In 2000, 224,000 cars were abandoned in England and this rose to a peak of 292,000 in 2002-03 as the value of metal fell. By 2005-06 that number had more than halved and it has continued to fall dramatically since then. To address abandonment, as well as improve environmental standards at sites processing end of life cars and light vans, the ELV Directive 2000/53/EC was adopted in September 2000. The Directive also requires producers to manufacture new vehicles without hazardous substances (in particular lead, mercury, cadmium and hexavalent chromium), and promotes the reuse, recyclability and recovery of end of life vehicles.

Due to the robust and durable design and manufacture of modern vehicles, most are scrapped for economic reasons. very different function which shapes the length of their life. Cars and vans have a relatively stable average life, which is mostly affected by the economic climate and actvities such as the 2009 scrappage scheme. An HCV’s end of life age is very much linked to fleet replacement cycles as is clearly visible on the graph above. 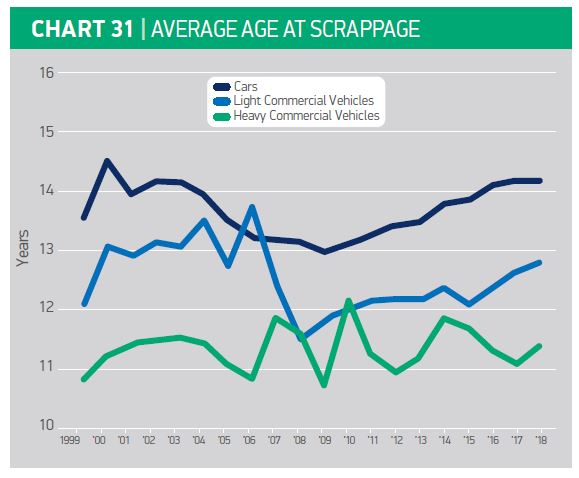 When the Waste Battery and Accumulators Regulations came into UK law in 2009, both government and industry had limited knowledge about what the future held for high voltage batteries. The UK Government’s 2018 Resource and Waste Strategy announced that the regulation would be updated in 2020, to bring it in line with the lastest developments in battery technologies and their lifecycle.

It has been 18 years since the first mass-produced lithium-ion batteries entered the UK market and still the volumes of these batteries reaching their end of life is rather limited. One of the contributing factors to this trend, are manufacturers’ efforts, in line with circular economy principes, to keep those batteries in use for as long as possible by utilising remanufacturing, reuse or second life applications, for example as energy storage.